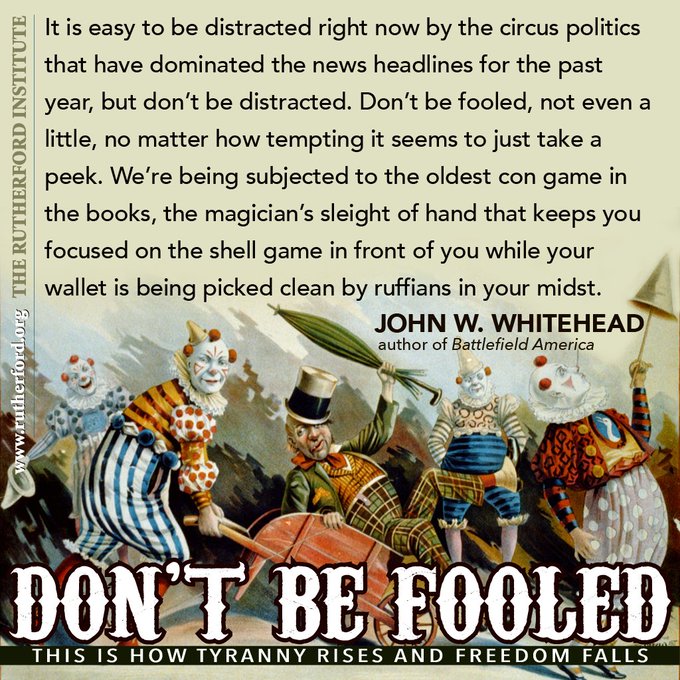 This is how tyranny rises and freedom falls.

What characterizes American government today is not so much dysfunctional politics as it is ruthlessly contrived governance carried out behind the entertaining, distracting and disingenuous curtain of political theater. And what political theater it is, diabolically Shakespearean at times, full of sound and fury, yet in the end, signifying nothing.

We are being ruled by a government of scoundrels, spies, thugs, thieves, gangsters, ruffians, rapists, extortionists, bounty hunters, battle-ready warriors and cold-blooded killers who communicate using a language of force and oppression.

The U.S. government now poses the greatest threat to our freedoms.

More than terrorism, more than domestic extremism, more than gun violence and organized crime, even more than the perceived threat posed by any single politician, the U.S. government remains a greater menace to the life, liberty and property of its citizens than any of the so-called dangers from which the government claims to protect us.

This has been true of virtually every occupant of the White House in recent years.

Unfortunately, nothing has changed for the better since Donald Trump ascended to the Oval Office.

Indeed, Trump may be the smartest move yet by the powers-that-be to keep the citizenry divided and at each other’s throats, because as long as we’re busy fighting each other, we’ll never manage to present a unified front against tyranny in any form.

The facts speak for themselves.

We’re being robbed blind by a government of thieves. Americans no longer have any real protection against government agents empowered to seize private property at will. For instance, police agencies under the guise of asset forfeiture laws are taking Americans’ personal property based on little more than a suspicion of criminal activity and keeping it for their own profit and gain.

We’re being taken advantage of by a government of scoundrels, idiots and cowards. When you’ve got government representatives who spend a large chunk of their work hours fundraising, being feted by lobbyists, shuffling through a lucrative revolving door between public service and lobbying, and making themselves available to anyone with enough money to secure access to a congressional office, you’re in the clutches of a corrupt oligarchy.

We’re being locked up by a government of greedy jailers. We have become a carceral state, spending three times more on our prisons than on our schools and imprisoning close to a quarter of the world’s prisoners, despite the fact that crime is at an all-time low and the U.S. makes up only 5% of the world’s population. The rise of overcriminalization and profit-driven private prisons provides even greater incentives for locking up American citizens for such non-violent “crimes” as having an overgrown lawn.

We’re being ravaged by a government of ruffians, rapists and killers. It’s not just the police shootings of unarmed citizens that are worrisome. It’s the SWAT team raids gone wrong—more than 80,000 annually—that are leaving innocent citizens wounded, children terrorized and family pets killed. It’s the roadside strip searches—in some cases, cavity searches of men and women alike carried out in full view of the public—in pursuit of drugs that are never found. It’s the potentially lethal—and unwarranted—use of so-called “nonlethal” weapons such as tasers on children for engaging in little more than childish behavior.

We’re being forced to surrender our freedoms—and those of our children—to a government of extortionists, money launderers and professional pirates. Under the guise of fighting its wars on terror, drugs and now domestic extremism, the government has spent billions in taxpayer dollars on endless wars that have not ended terrorism but merely sown the seeds of blowback, surveillance programs that have caught few terrorists while subjecting all Americans to a surveillance society, and militarized police that have done little to decrease crime while turning communities into warzones.

We’re being held at gunpoint by a government of soldiers: a standing army. As if it weren’t enough that the American military empire stretches around the globe (and continues to leech much-needed resources from the American economy), the U.S. government is creating its own standing army of militarized police and teams of weaponized bureaucrats. These civilian employees are being armed to the hilt with guns, ammunition and military-style equipment; trained in military tactics; and authorized to lock the nation down under martial law.

Whatever else it may be—a danger, a menace, a threat—the U.S. government is certainly no friend to freedom.

We won’t be able to sustain this fiction much longer.

“Things fall apart,” wrote W.B. Yeats in his dark, forbidding poem “The Second Coming.” “The centre cannot hold; Mere anarchy is loosed upon the world… Surely some revelation is at hand.”

Wake up, America, and break free of your chains.

Something wicked this way comes.

← Fantasy Warriors – Redefining Reality
All Are Victims of The Police State →