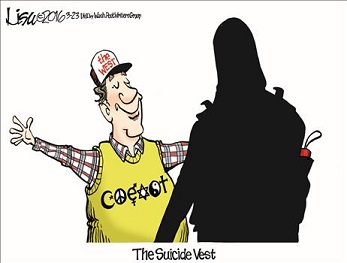 “The root cause behind the nonstop Muslim terrorization of the West is found in those who stifle or whitewash all talk and examination of Muslim doctrine and history; who welcome hundreds of thousands of Muslim migrants while knowing that some are jihadi operatives and many are simply “radical”; who work to overthrow secular Arab dictators in the name of “democracy” and “freedom,” only to uncork the jihad suppressed by the autocrats.” Raymond Ibrahim

The left is more concerned with shielding Islam from blame and shifting responsibility for terrorist attacks than in finding the truth. Those that are inflicted with the “Blame Everyone But Terrorist Syndrome,” attempt to transfer blame from the perpetrators to the victims. After all, as Khaled Fahmy, a historian at the American University of Cairo argues, they [Islam] are forced to fight back against “colonial powers” and “Western Orientalist” condescension. It is the nonviolence that needs to be explained, not the violence.”

Steven Fish, a political scientist at Berkeley, took it a step further by claiming that there was “very little empirical evidence that Islam is violent,” totaling ignoring the fact that for approximately one thousand years the Islamic world has been the scourge of the West, terrorizing Christian Europe as Arabs, Saracens, Moors, Ottomans, Turks, Mongols or Tatars, all operating under the same banner of Jihad. Over two centuries ago, however, a rising Europe defeated and defanged Islam.  As Islam retreated into obscurity, the post-Christian West slowly came into being. Islam didn’t change, but the West did. Muslims still venerate their heritage and religion which continually impels them to jihad against the Western “infidel.” In schools across Europe and in the Middle East, young Muslims are taught Islamic fundamentalist values. In mosques throughout the world, often sponsored by hard-line Pakistani sects, or the government of Saudi Arabia, Muslim kids are taught not just things that don’t fit with Western society, but things that are anathema to it.

Sadly, far from being limited to a number of left-wing elitists and institutions, the Western empowerment of jihad is the natural outcome of postmodern thinking, and the real reason an innately weak Islam can be a source of repeated woes for a militarily and economically superior west.  Mark Zuckerberg, founder of facebook, the poster child for stupid, now claims that the only way to combat Islamist atrocities is to create a world where everyone feels cared for and loved.   I say let’s buy him a ticket to Syria to put his theory into practice!

Doctor Michael Weiner, a renowned forensic psychiatrist, chairman of the Forensic Panel, has examined terrorist acts, perpetrators of mass killing, and religious extremist offenders spanning the criminal and civil case spectrum. According to him Islamist terrorism is not based on some crazy extremism – It is “planned, cold-blooded violence, used to mobile fear.”    Rather than being some “JV” team, as the left would have us believe, their leaders are selected based on how disciplined, dedicated, ruthless and in-control they are while carrying out destruction. They have no respect for civil liberties. They preach an autocratic, theocratic, tribal society that beheads innocents. Their power is total and brutal. It is radical Islam’s dehumanization of non-believers that feeds their cause and entitlement to brutalize. Likewise, this mindset demands that the only understanding we reach is submission, just like all fascism before.

According to Dr. Weiner, spectacle crime, such as terrorism, is a choice made by those with high expectations of themselves to do great but who are painfully aware of their underachievement.  The ideology they choose is the bromide of their disappointment; the enemy they choose is the projection of their shortcomings; and the terrorism they leap into is but a transcendence they would never otherwise achieve.

To accept that Islam condones violent and intolerance is to reject a number of cornerstones of postmodern Western thinking that far transcend the question of Islam. In this context, nothing short of an intellectual/cultural revolution, where rational thinking becomes mainstream, will allow the West to confront Islam head on. But that will never happen because the ruling elite forbid us to confront Islam.

The “more we kill, the more they hate us,” is their vacuous cry.  But the truth is, we are at war because Islam has acted to murder us, and to eliminate a way of life different from their own. We are hated, not because we kill, but because we exist. And as long as we allow the enemy to use their religious ideals to justify killing us, that ideology will use its very survival to claim God’s will to protect them in order to continue killing us.  So no matter how we as a nation pursue the Islamist threat, the United States will forever be portrayed as a devil deserving of destruction. Were we not to kill, we would still be slandered and propagandize against for any number of grievances.

The Islamic world is unusually defensive about the inhuman shame of Islamist violence, responding with rage and pride that blames non-Muslims. Undermining such self-deception is extremely difficult. But our leaders and the far left make it worse by accepting ingrained bigotry, be it the whitewashing of widespread rape by Muslim immigrants in Europe or silence in the face of Islamic misogyny or overlooking the slaughter of non-believers.

“The liberal intelligentsia’s reflexive blaming of Western society for anti-Western barbarity is the ultimate act of narcissism. That intelligentsia believes that everything that happens is about us. In fact, it’s not. The remaining pockets of savagery in the world exist independently of the West. According to the liberal elites, however, the West has no right to take common-sense security measures to defend itself against that savagery.”  Heather Mac Donald, Sometimes Jihad is Just Jihad