The Statue of Liberty came to be the most powerful symbol representing America and her power to offer freedom and democracy, but behind this symbol, there are other powerful symbols.

The Statue of Liberty was originally conceived as a Muslim woman to stay at the approach to the Suez Canal in Egypt, a lantern in her upraised hand serving as both lighthouse and a symbol of progress.

But the sculptor, Frederic Auguste Bartholdi of France, was unable to sell the idea to the ruler of Egypt, because in the Islamic world, women are symbols of submission, not progress. So the Islamic Egypt rejected the “Islamic woman of progress.”

Yet, Bartholdi did not give up his idea. He sold it to Americans, by transforming the Muslim woman into a neo-classical sculpture representing the Roman goddess of freedom, Libertas, or Lady Liberty — as she is known today.

So France gave goddess Libertas to America in the celebration of the 100 years of her independence in 1886. It was a gift to unite America to France, and eventually united America also to other realities. It was a birthday gift that changed the very symbol of America. It was the worst gift America has ever received.

But who accepted paganism was a very Christian America.

In the 1880s, in the exact time when America accepted goddess Libertas, over 90 percent Americans were Protestant. So the most natural symbol to represent America was the Bible, not a pagan sculpture.

How America came to accept a pagan symbol to represent her identity is a mystery. Perhaps, if revivals that came to America in the early 1900s and 1960s had come in the 1880s, America could have rejected the pagan goddess Libertas.

Not only it is modern paganization of America a baffling mystery to conservative Americans, but also her submissive attitude of welcoming millions of Muslim immigrants and “refugees.”

During the Ronald Reagan administration, hundreds of thousand Muslim “refugees” — in detriment of Christian refugees victims of Muslim oppressors — were received in America.

During the George H. W. Bush administration, hundreds of thousand Muslim “refugees” — in detriment of Christian refugees victims of Muslim oppressors — were received in America.

During the Bill Clinton administration, hundreds of thousand Muslim “refugees” — in detriment of Christian refugees victims of Muslim oppressors — were received in America.

During the George W. Bush administration, hundreds of thousand Muslim “refugees” — in detriment of Christian refugees victims of Muslim oppressors — were received in America.

During the Barack Hussein Obama administration, hundreds of thousand Muslim “refugees” — in detriment of Christian refugees victims of Muslim oppressors — were received in America.

Their behavior is shocking. Or America is crazily infatuated with Muslims or some “spirit” is destroying her Christian resistance and driving her to her Christian suicide by Islamic hands.

All these U.S. presidents are, nominally or not, Protestant Christians. By some reason, which is not Christian, they injected hundreds of thousand Muslims in America. Were they submissive to a secret agenda — as secret as the Muslim woman behind Libertas?

All these U.S. presidents are also known to have been submissive to Saudi Arabia, which is the biggest sponsor of Islamic terrorism around the world. The worst Islamic terror attack on America was 9/11, committed by 10 Saudi Muslims. To feign that they were not submissive to Islam, Bush and Obama chastised Iraq and blamed Syria, not Saudi Arabia. And they began the famous speeches “Islam is a religion of peace.” More submissive than this, impossible.

Following this government example, Hollywood has produced “patriotic” movies and TV shows where Muslims are usually portrayed as “innocent victims” of prejudice. “Patriotic” America is portrayed as suffering the malady of anti-Islamic “prejudice.”

What happened to America in 9/11 is what happens to Islamic women: They are bruised and stay submissive. America was seriously “bruised” by Muslim Saudis on 9/11. Even so, she continues her submission to Saudi Arabia.

Muslim women are bruised by their Muslim men, but they stay attached to them. America has been bruised by Islamic groups backed by the Saudis, but she stays attached to Saudi Arabia, which is the capital of Islam.

As result, Islam is increasing in America. Islam ranks as the second most prevalent religion in 20 states, many of which in the Bible Belt, which has been a region where conservative Protestants have traditionally a massive control. The Islamic growth is certain to challenge this control.

America has today several military bases in Saudi Arabia — to protect the Saudi dictatorship. America is in a state of submission to the Saudi Islam — as women are submissive in Islam. When America invades or attacks Muslims nations, it is because these nations are hated by Saudi Arabia. Militarily, America is at the service of Saudi Islamic whims and tantrums.

America accepted a disgrace on herself without knowing. A Roman pagan symbol of an old dead empire involved in the culture of death. Mystery of mysteries: the Roman goddess that is in New York has a hidden female soul submissive to Islam. The Statue of Liberty brings a pagan curse from the defunct Roman Empire. And as a bonus in the pagan curse, there is an Islamic curse. 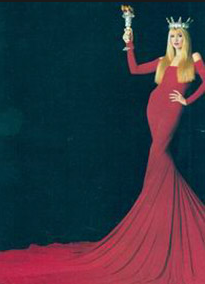 In the book of Revelation, the Great Babylon is represented by a woman as a highly commercial, capitalist futuristic society. In the 1980s, Rev. David Wilkerson, who compared America to Babylon, said:

Think of the “lady in the harbor”—the Statue of Liberty. Isaiah warned of sudden destruction upon a proud lady.

“And thou saidst, I shall be a lady for ever: so that thou didst not lay these things to thy heart, neither didst remember the latter end of it. Therefore hear now this, thou that art given to pleasures, that dwellest carelessly, that sayest in thine heart, I am, and none else beside me; I shall not sit as a widow, neither shall I know the loss of children: but these two things shall come to thee in a moment in one day, the loss of children, and widowhood: they shall come upon thee in their perfection for the multitude of thy sorceries, and for the great abundance of thine enchantments. For thou hast trusted in thy wickedness: thou hast said, None seeth me. Thy wisdom and thy knowledge, it hath perverted thee; and thou hast said in thine heart, I am, and none else beside me. Therefore shall evil come upon thee; thou shalt not know from whence it riseth: and mischief shall fall upon thee; thou shalt not be able to put it off: and desolation shall come upon thee suddenly, which thou shalt not know” (Isaiah 47:7-11).

All pagan gods are opposed to the true God. With goddess Libertas is not different. And the symbol behind the symbol (a woman submissive to Islam) is opposed to submission to God.

In the Roman Empire, Libertas was its symbol. Today, Libertas continues being the symbol of an empire.

The U.S. Libertas, and its occult submissive Muslim female soul, is a symbol fit for a pagan America. It promises freedom while she is herself a slave of her corruptions and depravities.

In fact, when America accepted Libertas as her symbol and identity, her capital Washington DC was already famous for her many brothels. A real Christian government would never accept Libertas. A government with its capital filled of brothels would warmly welcome her.

While America keeps her pagan symbol as the representation of her national identity, her call is to be submissive to paganism and eventually to Islam, which is already happening as demonstrated through the mysterious crazy passion of the last five U.S. presidents injecting hordes of Muslims into America.

With information from the DailyBeast and DailyMail.

← A Republic vs Mob Rule
A Murray Christmas for Obamacare? →