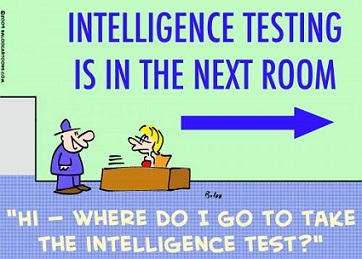 It is a common myth of our day, not surprisingly propagated by atheists, that religious believers are under-educated folk who have abandoned the use of reason in favor of blind faith.

A couple of academics asked: Why is Intelligence Negatively Associated with Religiousness? The answer, one report says, is that religion is an instinct, and it takes intelligence to overcome an instinct. According to William Briggs in an article at The Stream, that’s odd because it was just a few weeks ago that we read that brain damage caused religious fundamentalism. So which is it? Instinct or brain damage?

The study in question, The Relation Between Intelligence and Religiosity, A Meta-Analysis and Some Proposed Explanations was conducted by Miron Zuckerman, Jordan Silverman, both of the University of Rochester and Judith Hall of Northwestern University, Boston, who  combined 63 earlier studies, one dating back to 1928, to conclude that basically everyone is smarter than Christians.

Zuckerman believes that the higher intelligence of nonbelievers is attributed by a greater propensity to seek education and higher employment, thus assuming more personal control over their direct life.  He did acknowledge that it would be wrong to believe people who believe in God are stupid. “We say it is possible that having a high level of intelligence provides similar functions to what religion provides for people who adhere to a religion.”

The study also concluded that more intelligent people are less likely to believe in God because they are more likely to challenge established norms and dogma. They are also more likely to have analytical thinking styles, which other studies have shown undermine religious belief.

Hogwash! Cornell Statistics professor William Briggs disagrees with the conclusion of Zuckerman’s study. He says that combining 63 individual studies is very problematic. “Data of every flavor was observed, data that should not be mixed without an idea of how to combine the uncertainty inherent in each study…. In other words, they mixed data that should not be mixed….” The results of mixing data suggested a negative relationship specifically between intelligence and religious belief but the mathematical magnitude of that relationship is very small. And, almost all variation in religious belief is explained by unidentified factors other than intelligence. “It doesn’t matter if 50 or even 1000 most intelligent people on Earth are theists or Christians, that doesn’t statistically mean anything about the relative intelligence of Christians as a group.”

In another controversial research paper on the topic, Satoshi Kanazawa also claimed that liberals and atheists are more intelligent by analyzing data from a longitudinal study following students from middle school through adulthood. Conveniently the study included information on how religious the students were and the results of a standardized IQ test. By mashing those variables together Kanazawa claimed to prove that Atheists tend to be smarter. The most religious adults in the study had an average IQ of 97.14, whereas the Atheist adults had an average IQ of 103.09. That may seem like a wide gap – I mean 6 whole IQ points – until we remember that anyone in the IQ range of 90-109, according to the Wechsler Intelligence Quotient, is classified as average.

In practical terms, would it even be possible to tell the difference between someone with a 97 IQ and someone with a 103 IQ? It’s highly unlikely. In reality, all that Kanazawa showed is that the average person has average intelligence regardless of how religious they are, making one wonder why this guy’s work was even published.

So what does intelligence have to do with religion? Our personal relationship with God is a choice and the smugness of academia to suggest otherwise proves they aren’t always as bright as they think they are.    Check out any university and you’ll find people of above average intelligence who believe some of the dumbest, most , ridiculous theories every concocted.  And we’re not just talking intersectionality and gender theory, but all manner of sour thinking about the nature of man, truth and God. There is no need to rehash the list of insanities. You already known most of them and if you don’t, believe me you’re better off.   I guess it just takes someone smart to believe something really dumb.

“It is well known that the coastal, semi-skilled knowledge-class prides itself on its liberal, irreligious views, and that religious practice suffers on the coasts and on university campuses. What this means is up for debate. The intellectual elites were also far more susceptible than common folk to the lies of Leninist ideologies. Oddly enough, on average, serial killers also have IQs far superior to those of the norm. Geniuses are also more likely to go crazy than ordinary folk. What does all this prove? Not much. Any correlation between faith and education tells us precious little about whether or not God actually exists.” Father Thomas D. Williams, L.C.

← After The Dove, Beware The Snake
The Deceitful Road to Abortion →