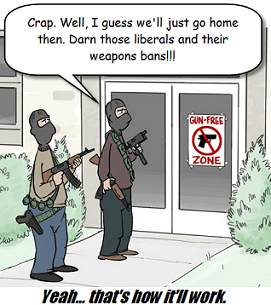 While debating gun haters with facts might be fun, in the end nothing changes.  Its like talking to a brick wall.  They still hate guns and you are left wondering how these “guys” could fight their way out of a paper sack.

Frank Miniter, executive director of American Hunter magazine and author of Saving the Bill of Rights, believes we need a new tactic.   He suggests that debate might not completely change a gun-hater’s mind but it might make them think and by thinking, they might begin to grasp the importance of individual freedom.  It sounds good on paper but unfortunately individual members of the left are no longer able to think for themselves.

With this latest shooting you will near the left’s favorite argument – the one that pretends that if we ban all guns everyone will be safe.  Apparently they don’t understand the concept of criminal or reality!  Another argument they love is that gun-free zones work.

How many children have died in a gun-free zone?  Mass murderers have a habit of taking guns into “gun-free zones” because these cowards know they can murder at will.  Gun-free zones are nothing more than an open invitation to murder.

Would disarming your neighbor make you feel safer?  How would you feel if you were trapped in a public place with some madman or terrorists who was assassinating  people?  Would you prefer an armed person, perhaps your neighbor, who could stop the killing or would you rather risk your life and the life of your family waiting for the police to show up?

Why do you hate women, children and the elderly?  Why would you want to deny law-abiding citizens the opportunity to protect themselves against a crazed killer or rapist?  If a madman kicks down your front door do you really think he’d wait until you can call  911 for assistance?  What is the average police response time in your town?  Could you just stand by on your gun-ban principles and watch them murder your loved ones?

In 2013 Chris Matthews interviewed Mayors Against Illegal Guns (MAIG) executive director Mark Glaze.  Matthews asked Glaze if he would consider an attacker wielding an ax handle as armed for the purpose of gauging whether the attacker’s victim had a right to defend themselves with a gun.  Glaze responded that you fight him with your fists or you de-escalate the situation by running away.  Fist verses axe handle  – not a pretty situation.  Running might help as long as the attacker is not a sprinter.  But what if the person being attacked is disabled or elderly?

Most of these liberal types would prefer that we give up our individual rights so we can  create a utopian society that has never existed!  Ask them, what time and place, maybe before the invention of gunpowder, was there a disarmed, safe, happy populace – a people held in the loving arms of a king, a government, a dictator, a tyrant, who didn’t fear thieves, madmen or tyranny.   You really think that you can create a utopia, a Shangri-La, a place where evil no longer exists and where everyone loves their fellow-man?

No human right known to man is more essential to a free and just society than the individual right of law-abiding citizens to protect themselves  and their loved ones in the face of criminal violence.  That’s why our Founding Fathers enshrined this freedom in the 2nd Amendment to the U.S. Constitution.  They knew that “liberty and the pursuit of happiness” are not possible without “life” and that all too often, life is not possible without the fundamental right to use a firearm in self-defense.

Our Constitution was designed to ensure that the government does not attempt to unduly restrict our rights, including the right to keep and bear arms.  To paraphrase Huey Newton,  unarmed people are slaves or subject to slavery at any given moment.  If guns are taken out of the hands of the people and only criminals have guns, then its off to the concentration camps, the gas chambers, or whatever the fascists come up with. One of the guaranteed rights of the American Constitution is the right to bear arms.  However, there is a greater right, the right of human dignity that gives all men the right to defend themselves.

← Gun Control Laws Only Affect the Law Abiding
A Dictator’s Dream: Suspend Due Process and Invoke a Presumption of Guilt? →