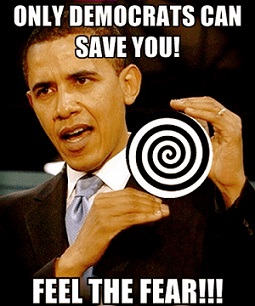 Post WWII, the Democratic Party consisted mainly of white ethnic working-class voters, educated progressives and white segregationists who saw the party of Woodrow Wilson as their natural home. That all changed in the late sixties era of pot smoking hippies and the civil rights movement. Democrats got religion, renounced their segregationist past and evolved into a coalition of black American and white working class voters who remained loyal to the progressive policies of FDR, white retirees dependent on Social Security and college educated liberals. The new coalition retained the pro-labor emphasis of the old left, but softened their stance on some social issues to appease the white working and middle-class Democrats, and took up enough of the cultural causes and rhetoric of the new left to satisfy their base.

During the 1980s Reagan moved the white working class to the Republican fold but by then their children were already in the hands of the liberals professors who took great care to mold them into the next social justice warriors. They became not just new Democratic voters but added money and cultural power to the fold. The party of FDR, all grown up now represents the hundred richest Congressional districts in the nation and use their voting block and money to advance the economic and cultural interests of post-Protestant WASPS, a consolidated cultural identity that, although populated mostly by white Americans, includes others who share their elite status.

So, how do these rich, mostly white Democrat party progressives continue to find the “offended” they need to sustain their power?  Start with the 1965 Immigration and Nationality Act that not only increased immigrants from Latin America and Asia, but also populated the U.S. with vulnerable new constituencies,  providing a ready supply for the left’s new image as defenders of the weak. Immigration populations enter the Democratic party coalition on the same terms as black Americans, as clients in a millet system, benefiting from liberal patronage. Throw in a few gay people, singles,  women who want the right to murder their babies, people who want to marry their dog, or  anyone who feels himself an “outsider,” and the basic structure of today’s Democratic party comes into full bloom.

In this new coalition of the offended, gay rights became particularly important. While environmentalism energized the upper middle-class liberal, it ran counter to those on the lower social ladder. Banning fracking didn’t energize Latino or black voters. Gay rights, by contrast, functioned as an upper-middle-class liberal issue that resonated throughout the coalition of the offended. The movement has a well-educated, relatively wealthy constituency whose goals pose no threat to the economic or cultural ascendancy of post-Protestant WASPS, and at the same time, promotes a solidarity in marginality that keeps the Democratic coalition unified and motivated.

To further motivate their base, liberals have invested heavily in identifying ever new patterns of discrimination such as ‘microaggression’ and ‘intersectionality’ that reflects a second wave, or is it a third wave of liberation politics. The 21st century Democratic solidarity-in-marginality coalition is held together by anxieties about exclusion and domination by the “other,” which is to say white conservative, Christian Republicans, creating a strong political demand for narratives of oppression, which liberal intellectuals are every so happy to supply.

This dynamic operates best at our universities where well-off, mostly white liberals [the post-Protestant WASPs] rule. It goes without saying that an Ivy League administrator must manage the optics very carefully to sustain “marginality” among the talented students who have gained admission therefore,  ‘microaggression’ and other key terms in the ever evolving scholasticism of discrimination play very useful roles.

Outside of academia, life in the real world is less theoretical and the rhetoric more demonic so the standard approach is to demonize conservatives as racists, xenophobes, and “haters.” When the big O was elected one might have concluded that the election of a mixed raced candidate to the nation’s highest office would have diminished the political currency of anti-racist rhetoric but alas, that did not fit into symbolic needs of the Democratic party which is dependent on a constant bombardment of denunciation to gin up fear of discrimination and marginality, keeping them on the front line of the cultural war.

One of the new front lines in the war against social norms is the attack on religious liberty or as progressives prefer to call it, “the right to discriminate.” Here the LGBT, and the new transgender movement, along with the Marxist feminist movement play an important role as their agendas collide with traditional religious convictions about God, creation, nature, life, and morality, thereby guaranteeing an ongoing culture war that the post-Protestant WASPS need to maintain power. After all, there is always a Westboro Baptist Church or some other marginal group to become the next poster child for the enduring, supposedly powerful forces of discrimination and oppression. Even a terrorist attack motivated by Islamist ideology can be transformed into an assault made possible by traditional Christianity.

The Democratic party’s power, like the power of George Wallace and others in an earlier era, depends on an atmosphere of fear, in this case a fear of discrimination, exclusion and oppression. This need explains why the ideologies of multiculturalism postulate that Western culture itself is based on oppression. The threat must be infinite and everlasting.

Source:  First Things, Bigot Baiting by R.R. Reno, which you can read in its entirety at this link.

← It’s no Longer a Conspiracy – Columbine, Waco, OK City, Sandy Hook, and Ruby Ridge
Hypocrisy of the Left Regarding Children →