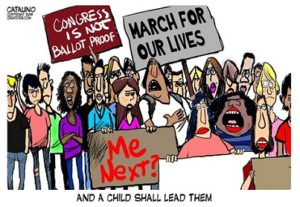 “And I will give children to be their princes, and babes shall rule over them. And the people shall be oppressed, everyone by another, and every one by his neighbor: the child shall behave himself proudly against the elders and the despised against the honorable.” Isaiah 3: 4-5

Obama is making big plans for the future of this country – he wants to use the Obama Foundation to create an army of little Obama’s running around the country, spreading “chaos.” In his narcissist mind all those little communists will serve the greater good. After all, “a lot of our problems are caused by old men.”

Obama’s mentor during the 80s was Frank Marshall Davis a communist and founding editor in the 1940s of the Chicago Star, a Communist USA publication which Davis used to push taxpayer funding of universal health care, blasted Wall Street and big business and big oil, demanded wealth redistribution to fund ” public works projects,” attacked Republican tax cuts, excoriated profits and millionaires and corporate executives. In fact, Davis’s politics were so radical that the FBI had him under continued surveillance and placed him on the “Security Index” meaning that in the event of a war between the US and Russia, Obama’s mentor could be placed under immediate arrest.

Davis’s influence was seen during Obama’s reign as he pushed cap and trade based on fake scientific data to facilitate redistribution of America’s wealth, pushed open borders, unlimited immigration, class envy, class warfare, racism, socialized healthcare, socialized education, gun control, abortion on demand, all the while arming Muslim terrorists and financing Iran’s nuclear program. He brought the Muslim Brotherhood Association, a known terrorist organization, into our government, systematically destroyed our armed forces, ignored the rule of law, released thousands of murderers and rapists back onto our streets and attempted to turn our sovereignty over to the United Nations. Actually there is just not enough room to list all of his “accomplishments” for the destruction of America.

Just imagine what a million little communists could do? We’ve already seen a glimpse through Black Lives Matters, Antifa, Occupy Wall Street, ad nauseam. We can now add those rebels-without-a-clue from Florida who are attempting to revolutionize America’s youth.  Naturally Obama  was elated by the March for Our Lives movement that demanded restrictions on firearm ownership, out-and-out confiscation, and nullification of the 2nd Amendment.

This children’s crusade is similar to the political youth movement for socialism led by Bernie Saunders, a do as I say, not as I do socialist. Both movements seek to elevate the opinions of children above our Founding Fathers. Both seek to create a “better” world by stripping more rights from American citizens and giving that power to an increasingly dominant central government.  And how better to accomplish this goal than through the destruction of our 2nd Amendment rights?  It worked for Stalin, it worked for Lenin, it worked for Mao Zedong and others as they systematically murdered an estimated 94 million people in China, the Soviet Union, in Cambodia, North Korea, Ethiopia, Afghanistan, the Eastern Block and Vietnam.   Mao mobilized students to restore him to power after he had destroyed the country’s economy.  Hitler mobilized children ages 10 through 18 to advance his agenda.  The Young Pioneer movement rooted in many Communist countries during the last century, even the U.S., is part of the Communist Party USA.

Leftist politicians like Obama and old Bernie are more than willing to support these movements hoping to overturn our Republic.  And it may well happen!  They keep tossing crap at the wall – sooner or later something is bound to stick.

Communism is a ruthless, totalitarian dictatorship run with absolute power by a few men at the top who thrive on the destruction of the peasants. There is no freedom, there is no safety, no security, and usually no food, jobs, private property, or education unless you consider indoctrination by the state run media as education.

Like Antifa, Occupy Wall Street, and Black Lives Matters, March for Our Lives is not some grassroots, teenager inspired organization. The March for Our Lives Fund is incorporated as a 501(c)(4) which means they don’t have to disclose donors.  Their website suggests that those who prefer to make a tax-deductible donation should write a check to the “March For Our Lives—Everytown Support Fund,” a left-wing gun grab organization run by Bloomberg.

In essence, March for Our Lives is funded by Hollywood celebs, led by a Hollywood producer and its finances are routed through an obscure tax firm in the Valley. Its treasurer and secretary are Washington D.C. pros. And a top funder of gun control agendas is also one of its directors. And I’m sure that with a little digging, George Soros is ultimately supplying the money.

“The glory of justice and the majesty of law are created not just by the Constitution – nor by the courts – nor by the officers of the law – nor by the lawyers – but by the men and women who constitute our society – who are the protectors of the law as they are themselves protected by the law.“ Robert Kennedy

← Suspend Due Process and Invoke a Presumption of Guilt?
America: Laboratory for the Left →