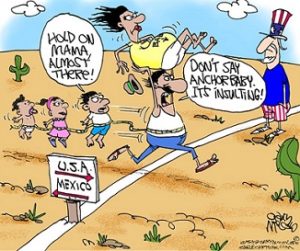 In 2015, candidate Donald Trump said he didn’t believe that children born on American soil to illegal aliens are American citizens. He was right. Birth Right citizenship is a fraud and big business for some.

It was not the understanding of the Supreme Court when they first considered the matter in 1872, or even when they considered it the second time in 1884, of even when they considered it a third time 15 years later that the 14Th Amendment mandated automatic citizenship for anyone and everyone born on U.S. soil, whether their parents were here permanently or only temporarily, legally or illegally, or might even be here as enemy combatants seeking to commit acts of terrorism against the United States and its citizens.

Those promoting Birth Right Citizenship, i.e. anchor babies, chose to ignore a key phrase in the Citizen Clause which sets out two criteria for automatic citizenship – a child born on American soil must be both “born or naturalized” in the U.S. and “subject to its jurisdiction” in order to be granted automatic citizenship.

With the ever-increasing waves of illegal immigration into this country undermining the policy judgments Congress has made about the extent of immigration that should be allowed, it is particularly important to get the birthright citizenship issue right, as the mistaken notion about it has provided a powerful magnet for illegal immigration for far too long. Worse, it has encouraged a trade in human trafficking that has placed at great risk millions of men, women, and children who have succumbed to the false siren’s song of birthright citizenship.

Accepting the left’s theory that to become a citizen one must merely be born on U.S. soil, renders the entire “subject to the jurisdiction” clause redundant, leading to absurd results. Historically, the language of the 1866 Civil Rights Act, from which the Citizenship Clause of the Fourteenth Amendment (like the rest of Section 1 of the Fourteenth Amendment) was derived so as to provide a more certain constitutional foundation for the 1866 Act, strongly suggests that Congress did not intend to provide for such a broad and absolute birthright citizenship.

The 1866 Act provides: “All persons born in the United States, and not subject to any foreign power, excluding Indians not taxed, are hereby declared to be citizens of the United States.” As this formulation makes clear, any child born on U.S. soil to parents who were temporary visitors to this country and who, as a result of the foreign citizenship of the child’s parents, remained a citizen or subject of the parents’ home country, was not entitled to claim the birthright citizenship provided in the 1866 Act.

The Fourteenth Amendment was specifically designed to codify the provisions of the 1866 Civil Rights Act and to place that act beyond the ability of a future Congress to repeal. Nevertheless, because the jurisdiction clause of the Fourteenth Amendment is phrased somewhat differently than the jurisdiction clause of the 1866 Act, some have asserted that the difference dramatically broadened the guarantee of automatic citizenship contained in the 1866 Act.

The left argues that the positively-phrased “subject to the jurisdiction” of the United States can easily be intended to describe a broader grant of citizenship than the negatively-phrased language from the 1866 Act, allowing birth on U.S. soil sufficient for citizenship. But the relatively sparse debate we have regarding this provision of the Fourteenth Amendment does not support such a reading.

When pressed about whether Indians living on reservations would be covered by the clause since they were “most clearly subject to our jurisdiction, both civil and military,” for example, Senator Lyman Trumbull, a key figure in the drafting and adoption of the Fourteenth Amendment, responded that “subject to the jurisdiction” of the United States meant subject to its “complete” jurisdiction; or not owning allegiance to anybody else.” And Senator Jacob Howard, who introduced the language of the jurisdiction clause on the floor of the Senate, contended that it should be construed to mean “a full and complete jurisdiction,” “the same jurisdiction in extent and quality as applies to every citizen of the United States now” (i.e., under the 1866 Act). That meant that the children of Indians who still “belong[ed] to a tribal relation” and hence owed allegiance to another sovereign were not citizens. While they were within the territorial limits of the U.S., they were not, strictly speaking, foreign states, they were alien nations, distinct political communities,” according to the Court.

It was the debate over whether American Indians born within the territorial limits of the U.S. but subject and owning allegiance to their tribe that brought about the switch from “not subject to any foreign power” clause of the 1866 Act, to the “subject to the jurisdiction” clause of the 14th Amendment to avoid any concern that American Indian tribes might be deemed within rather than without the grant of automatic citizenship because they were “domestic” rather than “foreign” sovereign powers.  Indeed, if anything, Indians, as members of tribes that were themselves dependent to the United States and hence subject to its jurisdiction, had a stronger claim to citizenship under the Fourteenth Amendment merely by virtue of their birth within the territorial jurisdiction of the United States than did children of foreign nationals.

Echoing the sentiments of Eastman, Professor, Dr. Edward J. Erler, Senior Fellow at the Claremont Institute for the Study of Statesmanship and Political Philosophy, pointed  out that the framers of the 14th Amendment sought to reassure Congress in 1868 that the citizenship provisions did not cover – nor were crafted with the intent to grant – citizenship to children of foreign nationals born in this country.

Birthright Citizenship came about as a footnote By Justice William J. Brennan on his 5-4 opinion in Phyler v. Doe, asserting that “no plausible distinction with respect to the 14th Amendment can be drawn between resident aliens whose entry into the U.S. was lawful and resident aliens whose entry was unlawful.” Brennan’s authority for this statement appeared in an obscure book written in 1912 by Clarence L. Bouve. Justice Brennan’s footnote defies the intent of the authors of the 14th Amendment.

You can read the testimony of Dr. John C. Eastman, on the True Meaning of the Fourteenth Amendment’s Citizenship clause, given April 29, 2015, at this link.