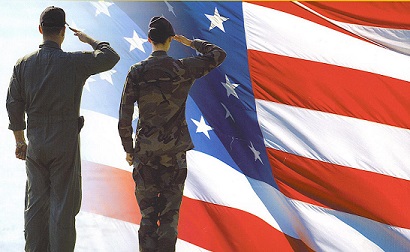 On June 14, 1777, the Continental Congress replaced the British symbols of the Grand Union flag with a new design featuring 13 white stars in a circle on a field of blue and 13 red and white stripes – one for each state.   Although it is not certain, this flag may have been made by the Philadelphia seamstress Betsy Ross, who was an official flag maker for the Pennsylvania Navy.

When the official flag was adopted in 1777, the colors red, white and blue did not have any specific meaning.  However, the colors of the country’s Great Seal created a year earlier did. Red represented hardiness and valor; white represented purity; and blue represented vigilance and justice.

A flag of this design was first carried into battle on September 11, 1777, in the Battle of  the Brandywine. The American flag was first saluted by foreign naval vessels on  February 14, 1778, when the Ranger, bearing the Stars and Stripes and under the command of Captain Paul Jones, arrived in a French port. The flag first flew over a foreign territory in early 1778 at Nassau, Bahama Islands, where Americans captured a British fort.

The flag didn’t always have 13 stripes.  In 1794, two extra stars and stripes were added to honor Kentucky and Vermont joining the Union.  More than 20 years late, after concerns about having to keep adding stars and stripes, it was officially decided to go back to the original 13 stripes and to add stars whenever another state joined the union.

On June 14th, 1885, Bernard J. Cigrand, a 19 year old teacher at Stony Hill School, in Waubeka,  Wisconsin, placed a 10 inch, 38 star flag in a bottle on his desk and  then assigned  his students to write an essay on the American flag and its significance.  This was the  beginning of Cigrand’s long years of effort to bring about national recognition and observance of Flag Day.

President Wilson, on May 30, 1916, and President Calvin Coolidge in 1927 issued proclamations calling for a nationwide observance of Flag Day but,  it was not until 1949 that President Truman signed an Act Of Congress designating the annual observance as June 14.  In 1966 Congress requested that the President issue an annual proclamation designating the week in which June 14 occurred as National Flag Week.

On June 14th, 2004, the 108th U.S. Congress voted unanimously on H.R. 662 to honor the efforts of Bernard Cigrand by proclaiming that Flag Day originated in Ozaukee County, Waubeka, Wisconsin.

The current star pattern on the flag was designed in 1958 by then 17-year-old student Robert G. Heft for a history project. The design was ultimately submitted to Congress and accepted by President Eisenhower.

It is time to remember that old wisdom our soldiers will never forget: that whether we are black or brown or white, we all bleed the same red blood of patriots, we all enjoy the same glorious freedoms, and we all salute the same great American Flag. Donald Trump

← Deviant Behavior: It’s Not Natural
Who Are the Real Victims of Bullying? →