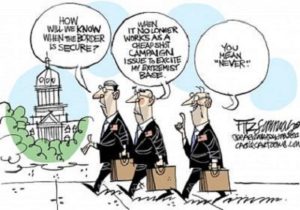 Because of the cost to American taxpayers, President Trump is considering new rules that would make it difficult for immigrants to receive a green card if they or one of their dependents are receiving Medicaid, cash welfare, food stamps or Social Security benefits.  According to MPI, if rule changes were to take place, based strictly on observed effects during the late 1990s, there could be a decline of between 20 to 60 percent in welfare use by illegals and changes could reshape future immigration flows.  Specifically, it would make it more difficult for children, the elderly, those without education or limited English proficiency and incomes under 250% of the federal poverty level to enter and remain in the U.S.

A 2017 study by FAIR showed that at the federal, state, and local levels, taxpayers shell out approximately $134.9 billion to cover the costs incurred by the presence of more than 12.5 million illegal aliens, and about 4.2 million citizen children of illegal aliens, amounting to a tax burden of approximately $8,075 per illegal family member.  Of the $134.9 billion, the federal government spent 45.9 billion and  local governments spent 89 billion.  FAIR also reported that the federal government collected close to 19 billion in taxes, leaving a deficit to American taxpayers of $116 billion.

Kirstjen Nielsen, Homeland Security Secretary, says that legal loopholes have hamstrung immigration enforcement which has allowed at minimum 50,000 illegals a month to cross our southern border.  That is an additional 600,000 plus illegals a year to live off American taxpayers.

Case in point: California, which according to the L.A. Times, has more than 10.2 million illegals working for cash and not paying taxes. They also report that 95% of warrants for murder in L.A. are issued for illegals; 75% of people on the most wanted list in L.A. are illegals; over 2/3’s of all birth  in L.A. County are to illegals from Mexico on Med-Cal whose births were paid for by taxpayers; nearly 35% of all inmates in detention centers are Mexican illegals; over 300,000 illegals in L.A. county are living in garages;  the majority of gang members are most likely illegals from South America; nearly 60% of all occupants of HUD properties are illegals; 21 radio stations in L.A. alone are Spanish speaking; and 3.9 million speak Spanish only.

The U.S. Citizenship and Immigration Services reports that  of the nearly 60,000 Deferred Action for Childhood Arrivals (DACA), recipients have at least one arrest on their record, including 10 accused murderers.   The Washington Examiner reports that  USCIS Director L. Francis Cissna confirmed that 59,786 DACA “kids,” have been arrested after being accepted into Obama’s amnesty program for illegals brought to this country by their parents.  Fox News added that 10 of those arrested have been charged with murder.

Of the 60,000 illegal aliens who’ve been enrolled in DACA, Fox News reports that about 90%, or 53,792 had arrests on their record before they were accepted into Obama’s insta-amnesty program.  Of those arrests, more than 4,500  were for charges of assault or battery; another 830 for sex crimes including rape, sexual abuse or indecent exposure; and 95 for kidnapping, human trafficking or false imprisonment.

Unfortunately, under Obama’s program being arrested, and charged with a crime, even multiple times wasn’t a disqualifier for the program.  You can only be rejected if you’ve been convicted with a felony or three or more misdemeanors. If a charge is dropped or plead down to a lesser offense, no matter what the original charge was, you’re still eligible to get your free pass to live off American taxpayers.

Let us be clear.  America is under no obligation to allow anyone into our country, under no obligation to compensate, in any way, the citizens of the failed governments around the world, including those in our own hemisphere. In fact, had we any obligation to the peoples of less successful countries it would be to encourage their governments to allow, even facilitate, the freedoms that have made America a beacon for their “tired and poor.”   We are a nation of laws, not of men. And our laws are, or should be, to benefit citizens of our own country, not to be customized to fit the left’s political agendas.

← A Grave Sin
Put on the Full Armor of God and Fight! →