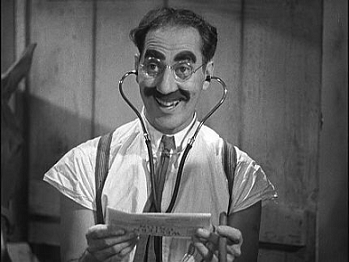 Public schools are practically defined by a tsunami of quackery.  Every idea pushed in the public schools is pushed to the point of pathology.  Once the Education Establishment swings behind an idea, they think it is their job to destroy all other ideas, to force every student to accept this one idea uber alles.

Quacks are people who treat any one idea (it may be a bad idea or a good idea) as if it is the entire world.  Excess is the problem.  A lack of proportion is what makes someone a quack, and what makes quacks a menace.

There are poisons which, used in tiny doses, can be beneficial.  It’s the dose that makes the poison.  Quacks would not understand that.  If a few drops are good, they would say, let’s make everyone swim in the stuff.

Quackery lies in treating some particular answer as THE answer, as if someone settled on spinach as the perfect food and outlawed all other vegetables.  In a complex world, however, we need complex, nuanced answers. These will invariably consist of many interlocking answers. Only a quack would say, no, we need only THIS answer.

There was a 70-year period when the Education Establishment actually outlawed teaching the alphabet.   According to Whole Word, children were to memorize the shapes of words, and not try to learn the letters or their sounds.  The prevailing orthodoxy today is a mix of various methods, so some people may have forgotten just how irrational our public schools were pre-1999.  Whole Word, which is pure quackery, is a paradigm of everything wrong in the public schools, and in modern pedagogy. (NB: the new version, usually called Balanced Literacy, is an improvement but still only halfway back to non-quackery.)

Here’s another illustration of knowing no limits. A popular instructional method called Constructivism might, in small doses, be a plus.  But our public schools seem incapable of subtlety.  Having embraced Constructivism, schools tend to declare that all direct teaching is evil.  Suddenly we’re in this bizarre other-world where the only valid knowledge is that which the students find for themselves.  That can be a long slow process. Direct instruction, where teachers actually teach what they believe needs to be taught, is the quick road to mastery.  Constructivism is the slow road to not knowing much.

Public schools are a microcosm of the broader political landscape. Every “liberal” idea is now embraced as though it is a religion unto itself. There are people at the ACLU who will argue that each alleged right is supreme and cannot be qualified in any way.

So we can’t just have a little improvement here, a little improvement there. No, that’s evil because it’s partial. So we listen to a woman who says, “Intercourse is the pure, sterile, formal expression of men’s contempt for women.” Well, that’s an English sentence, but so is “Flowers can discuss the Roman Empire.” Surely that couldn’t be the ravings of a quack.

The worst of it is that the far-left has always used minorities and the disadvantaged in a manipulative way. It’s never clear that liberals actually care about the people they claim to speak for.  Rather they use these “oppressed” people as levers to seize more control.  If the Education Establishment actually cared about disadvantaged kids, they would make sure those kids learn to read in the first grade.  But they don’t do this.  So we know what’s in their hearts.

Do you think Stalin cared about black people? Unlikely.  But he tried to meddle in American racial politics, pushing the Comintern at its Sixth World Congress in 1928 to adopt a resolution  affirming the presence of a black nation in the American South.  Stalin said it had the right to secede.  How convenient.  Stalin, of course, was a clever tactician of trouble, and a brilliant community organizer who never let a crisis go to waste.

For the Greeks, balance and proportion were the essence of philosophy. Reason was a tool for finding the Golden Mean. We needed to locate our proper dominion between ruinous extremes, between heaven and hell.  Subtlety is required.  Quacks would not understand any of this.

I’d like to suggest it’s good to be a Don Quixote now and then, and tilt with all the silly windmills. Call them what they are, antisocial quackery.

Maybe now and then it’s helpful to state the obvious. A little of some things is a good idea. A lot of those same things is a force for destruction.

Bruce Deitrick Price, an author and education reformer and founder of  Improve-Education.org in 2005.  Mr. Price’s article – The Quacks Are Winning is no longer available on the Web.