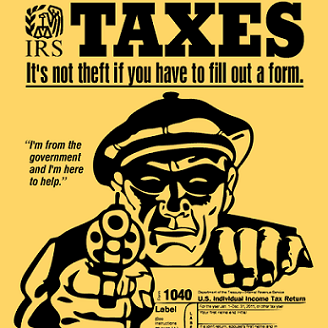 Senator Elizabeth Warren said during a recent interview that when Democrats take over during the 2018 midterm election they are planning to raise income tax levels.  And not just to pre-Trump reform levels but to infinity and beyond!  According to Warren, a  50% to 90% personal income tax rate for Americans is not out of the question, even suggesting that it would benefit the middle class.  She added: “We need a budget; we need a tax bill that works for all of us. So what I’d like to see is, I’d like to see us strengthen America’s middle class.” Someone like to explain how stealing all of our hard earned money is going to benefit the middle class!

Over the years Democrats have cast themselves as the party of compassion using envy to promulgate class warfare in the name of fairness. They throw out the race card, corporate greed, religious intolerance and social justice to put conservatives on the defensive and to convince us that government is the universal solver of all that ails us.

Solutions they propose to solve society’s social “ills” have been anything but a solution.  Their never-ending attempts at social engineering by government fiat not only fails to solve America’s social and economic problems, they prolong and perpetuate them. Government does not solve problems – government creates the problem and then makes it worse!

Their most frequent remedy of a nonexistent problem is one of seizing from the rich to give to the poor.  It takes a thousand different forms but what it amounts to is the same tired old Socialism that has never worked and will never work.   All schemes for redistributing or equalizing incomes or wealth must undermine and destroy incentives at both ends of the economic scale.  Socialism abolishes incentives for the unskilled or shiftless to improve their condition in life through their own efforts. It also shows those that do produce that earning anything above what they are allowed to keep is useless.   The long term effects are, of course, national impoverishment.

Socialism is incapable of solving any problem it addresses in the economic sphere because its premises are unsound; its conclusions are consistently failures. It cannot build a viable living social order, it only kills the order it seizes or inherits.  That is why they work so hard to create disorder within the country to maintain control and when that no longer works, the use of force becomes the norm.  Force is defended and upheld as necessary to suppress the enemies of the people and to protect the government from destruction. .

Businesses create jobs – government creates dependency.  Only when businesses can anticipate sustained growth will they add jobs and hire people to do them.  If politicians were honest about wanting to help the poor they would remove the barriers they use to block the poor from climbing out of poverty.  To eliminate poverty you must solve its root cause and you cannot eliminate the root cause by rewarding it with government handouts.  Rather than freeing the poor from dependency – government transfers that dependency to themselves leaving the less politically connected people at the mercy of the political process and their ambitions.

As J.D. Vance explored in his memoir Hillbilly Elegy, the real poverty of the poor is spiritual rather than material.  Fixing that would require judgments over personal behavior, particularly drug use, alcoholism, sex, violence, and many more pathologies.  Another solution to poverty is jobs and a decent school system where education is king, not some left-wing indoctrination social agenda.

“If taxation without consent is not robbery, then any band of robbers have only to declare themselves a government and all their robberies are legalized.”  Lysander Spooner