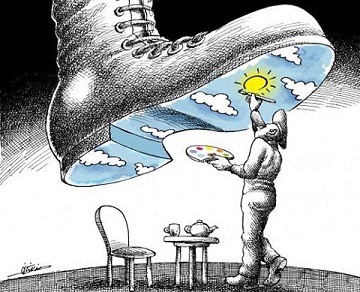 For a magician to fool his audience his deceit must go unseen, and to this end he crafts an illusion to avert attention from reality. While the audience is entranced, the deceptive act is committed, and for the fool, reality then becomes inexplicably built upon a lie. That is, until the fool wakes up and recognizes the truth in the fact that he has duped.

We live in a world of illusion carefully crafted to resemble a representative democracy, while in reality we are little more than slaves in thrall to an authoritarian regime, with its constant surveillance, manufactured media spectacles, secret courts, inverted justice, and violent repression of dissent. And for the few who dare to challenge the status quo, they are assured of being branded either as conspiratorialists, alarmist, lunatics or outright traitors.

Obeying the law is considered a moral obligation for the majority of Americans even though corruption, scandal and wickedness repeatedly demonstrates that the law is a flexible commodity for those with the muscles to bend it to their will. When the law itself does not follow the law, there is no law and there is no justice.

The U.S. Supreme Court, once the last refuge of justice, the one governmental body really capable of rolling back the slowly emerging tyranny enveloping America, has instead become the champion of the American police state, absolving government and corporate officials of their crimes while relentlessly punishing the average American for exercising his or her rights.

We live in an illusion of choice and freedom. Read between the lines, check out the fine print – we are not free, not by any intelligent standard. Freedom means having choice, yet in today’s world, choice has come to mean a selection between available options, always from within the confines of a corrupt legal and taxation system and within the boundaries of culturally accepted and enforced norms. You need to look no further than the two entrenched corrupt political parties that are paraded as the pride and hope of the nation, while third-party and independent voices are intentionally blocked, ridiculed and plowed under. This illusion of choice and freedom is a powerful oppressor because it fools us into accepting chains and short leashes as though they were the hallmark of liberty.

The seizure of political and economic power by corporations is unassailable. They fund and determine who is elected; they buy the legislators who write our laws, who determine our defense policies and military spending. They are appointed to seats of power within the government to control our children’s education, our trade, our environmental policies.

Truth has become a touchy subject in our culture. We’ve been programmed to believe that truth only comes from the demigods of media, celebrity, and government. It is heretic to say otherwise. To maintain order, the powers that be depend on our acquiescence to their version of the truth. While independent thinkers and some uncorrupted journalist blow holes in this “official” version of reality, the illusion of truth is so powerful that it takes a serious personal upheaval to shun the cognitive dissonance needed to function in a society that openly chases false realities. This vast disconnect between the official narrative of reality and reality itself creates an Alice-in-Wonderland experience where propaganda is so pervasive, and truth is so rarely heard, that people do not trust their own senses.

The American people now belong to a permanent underclass. It doesn’t matter what you call us – chattel, slaves, worker bees, drones, it’s all the same. What matters is that we are expected to march in lockstep with and submit to the will of the state in all matters, public and private.

Through our complicity in matters large and small, we have allowed an out-of-control corporate-state apparatus to take over every element of American society. Our failure to remain informed about what is taking place in our government, to know and exercise our rights, to vocally protest, to demand accountability on the part of our government representatives and, at a minimum, to care about the plight of our fellow Americans has been our downfall. Having allowed ourselves to descend into darkness, refusing to see what is really happening, happily trading the truth for false promises of security and freedom, we have allowed the police state to emerge and to flourish.

“The illusion of freedom will continue as long as it’s profitable to continue the illusion. At the point where the illusion becomes too expensive to maintain, they will just take down the scenery, they will pull back the curtains, they will move the tables and chairs out-of-the-way and you will see the brick wall at the back of the theater.” Frank Zappa

Sources: Adapted from The 6 Grand Illusions That Keep Us Enslaved To The Matrix, at Waking Times, and The Land of the Blind: The Illusion of Freedom in America by John Whitehead, The Rutherford Institute