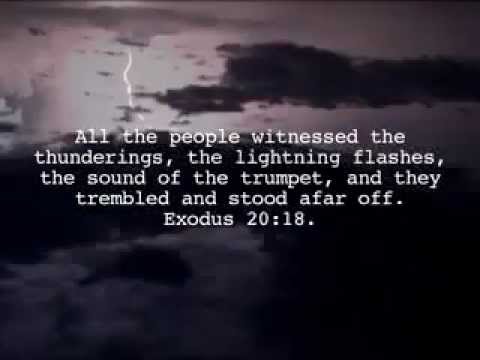 The voice of God was heard by the multitudes who had been delivered from Egypt only three months previously.  The voice of Almighty God had to have been incredibly loud to be heard over the stormy manifestations, and it is written that the people cried out not to hear anymore (Ex 20:19). This is all recorded in detail in Exodus, Chapters 19 and 20, and in Deuteronomy 4:10ff,  5:4, and 5:22. It was a cosmic mass event which changed the course of human history forever. It was not a marketing extravaganza.  The Everlasting Source of the moral law revealed His most basic requirements – His eternal requirements – to fallen and depraved humanity. In His absolute freedom, He gave it to the Israelites (today, the Jewish people) from whose midst would emerge our Lord and Savior, Jesus Christ.

The consequences of two million people having heard the sacred Ten Commandments directly from Almighty God, announced by His audible voice, has eternal significance.  That significance is this: they define the essence of the moral law forever, as that law originated in the Godhead.  The Godhead is not a hypothetical Godhead, with variabilities owing to man’s biases, including his tendency to exaggerate, his family background and/or means of employment, his desire to please those in authority, nor distortions coming from fatigue or changes in diet. Also, the thought that one person may have hoodwinked the masses into believing a false teaching is also eliminated.  God Himself presented the Ten Commandments to an entire people who were overwhelmed both by the presentation and the Presenter.

In today’s world, increasing numbers are reversing the Ten Commandments and/or “contextualizing” them.  Instead of “You shall not kill,” we see the command “Have as carefree a life as possible. Therefore, if your pregnancy gets in the way of that, kill the child.”  Instead of “Honor Your Father and Your Mother,” we see the command, “Assert your individuality.  If you are an eight year old boy and feel like wearing a dress to school, and going pee-pee in the girls’ bathroom, then do so, even if you have to resist or reject your parents and/or teachers.”    Instead of “You shall have no other gods before me,” we see “All religions reveal God’s love, truth, and morality.  With this new phony commandment, churches have ecumenical services where non-Bible believing persons are invited to pray and even to preach.  The Swedenborgian Church, for example, believes all religions reveal the truth, and the Swedenborgians are members of the National Council of Churches.

The Ten Commandments were engraved by the Almighty on those tablets as a permanent record of His proclamation.  If we are thinking clearly, we shall recall that God spoke everything into existence as described in Chapter One of Genesis. There are a series of “And God said,” and after He said, that which He said existed. There was no series of steps between the “said” and the “existent realities” such as light evolving from some primordial substance to the state of being light. Similarly, Almighty God spoke the moral law into existence.

He didn’t say “Let the water teem with living creatures…followed by bacteria, followed by amoeba, followed by small fish, followed by larger fish, etc.” The teeming reality of sea life came into existence following His having “said” it existed.  No staging in of existence is implied. With His “said” we went directly from nothing to the various “somethings” indicated in Genesis.  Even if there were some intermediate stages between the said and the actualities proposed in Genesis, those actualities were defined at that moment He spoke.

The speaking of the Ten Commandments to the people suggests to this writer that when Genesis says, “And God said….” it means that God literally spoke and the reality immediately came into existence.  Thus, when God said “You shall not commit adultery” or “You shall not murder” those statements literally created the moral law even though we can find millions of examples of murders and adultery.  In the same sense, even if certain geologists or maritime scientists find examples of times when the oceans did not teem with life, that would not negate the creation of teeming oceans by Almighty God.  All the counter examples in the world cannot refute the connection between God’s speaking – the creative Word of God – and the ontological reality (that is, reality in being) of that which resulted in His speaking.

Insofar as the world deviates from the moral law of Almighty God as spoken audibly to the Israelites – but intended for the world eventually to know – the world is fallen in sin.  Sin includes having other Gods before Him.  Thus, someone might say “Well, Almighty God didn’t create my computer so therefore I do not have to give Him the glory for that, or for the subway, the airplane, or for stents for veins and arteries.  I give thanks and praise to science and to the companies and inventors who have brought these great inventions about.”  If these “creations” are ranked higher than the original creation or are ranked higher than the moral law, then one has violated the First Commandment.  Only gratitude to Almighty God for His creation, not for other technological creations, is considered true worship, true gratitude, and is the gratitude God desires.  All other creations are second or third level creations; we use them happily, but we should not make idols of them. We are only to worship what Almighty God has told us to worship.

With this in mind, we see that our worship of our Lord and Savior is not just putting another gifted person on a pedestal.  Rather, it is the outcome of worshipping that which Almighty God has given us.  When John the Baptizer baptized Jesus, the Holy Spirit descended, and the voice of God (again, the Voice) said to John, “This is my beloved son in whom I am well pleased.”  (Matthew 3:13–17; Mark 1:9–11; Luke 3:21–23)  Then, later, at the transfiguration,  John, James, and Peter were with Jesus. “While he [Jesus] was still speaking, a bright cloud covered them, and a voice from the cloud said, “This is my Son, whom I love; with him I am well pleased. Listen to him!” (Matthew 17:5) There is a thread connecting the Genesis account of Creation, the giving of the Ten Commandments, and the revelation of Jesus Christ as Lord and Savior.  That thread is the Voice of the Lord God Almighty speaking His truth as the foundation for Reality.

← Looking Into The Void
Turning Away From God →