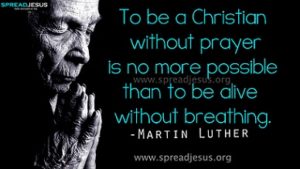 There is no American demographic the Left despises more than Christian conservatives. Even as it cherishes Muslim religious liberty and rails against “Islamophobia,” it systematically mocks Christians and attacks Christian religious expression, especially prayer.

The Huffington Post is particularly out front when it comes to mocking prayer. Sam Stein and Arthur Delaney penned an article claiming that when people are gunned down in a mass shooting, all officials can do is “rush to offer their useless thoughts and prayers.” Not to be outdone, Kim Bellware actually went so far as to claim that GOP leaders “who tweet their thoughts and prayers” are taking bribes from the NRA in a “pay to pray” scandal.

Enough of your prayers, they cry, let us see legislative action! The more radical protesters go one step further by raging and blaspheming against God who allows such tragedies to happen. John Horvat writes that for them, prayer is a kind of therapeutic exercise of weak individuals who cannot face reality, who must resort to appealing to an imaginary being from whom they imagine they receive favors.  The left recognizes no reality or power beyond the physical world preferring instead to rely only upon themselves. And when they fail in life, as all eventually will do, they  become ever more resentful against those who offer comfort.

Prayer is not some mystical practice reserved only for clergy. It is simply communicating with God, listening and talking to him. It doesn’t require us to light candles, prostrate ourselves or chant a mantra. We can pray as we go about our daily lives knowing that it can accomplish anything because with God, all things are possible.  God invites His people to pray persistently (Luke 18:1); with thanksgiving (Philippians 4:6), in faith (James 1:5), humbly (James 4:6), confidently (John 16:23), within the will of God (Matthew 6:10), for the glory of God (John 14:144-14), and from a heart right with God (James 5:16).

In an article at the Huffington Post, Jerry De Witt writes that even though he believes that “nothing fails like prayer” to actually get anything done, he still believes in praying because of the personal benefits clearly documented by doctors, psychologists and philosophers. He sees his prayer to this “imaginary listener” as beneficial because it never interrupts his train of thought or ever tries to make itself the subject of the conversation. So when he shares (prays) his innermost thoughts and feeling with “no-one or no-thing” there is far less pressure to maintain a façade or pretend to be better off than he really is. This form of personal, highly emotional prayer, he claims, not only passes the time but helps all of us emerge from life’s hardest tests.  How sad for him!

Apparently De Witt isn’t alone because according to the Pew Research Center, 6% of atheists pray every day and 11% pray weekly or monthly. Prayer, like so much of American religious belief, has gone rogue. Now it can consist of all manner of things and can be directed toward all sorts of entities or none at all.

There is a prayer that I’ve seen several times on line, author unknown, that shows the desperate need for prayer that all Christians face. It goes:

Dear God, So far today, I’ve done all right. I haven’t gossiped. I haven’t lost my temper. I haven’t been greedy, grumpy, nasty, selfish or over indulgent. I’m very thankful for that. But in a few minutes, God, I’m going to get out of bed; And from then on, I’m going to need a lot more help. AMEN.

“Offering thoughts and prayers — especially when the facts are confused, people are in pain, and victims themselves are praying and begging for prayers — is an act of compassion. Political posturing is an act of arrogance. Most Americans are wise enough to discern the difference.” David French