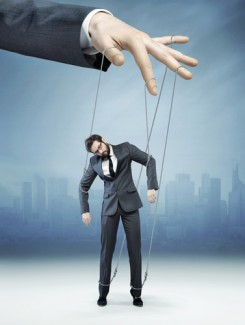 The need to control others may not make a lot of sense to you but they are out there. They want to micromanage what you say, how you act, even what you think quietly in your own mind.   Total mind control, in which a sender controls the receiver like a marionette puppet, will not be possible anytime soon but trust me, they are working really hard to make it a reality.

Earlier this year, it was revealed that Microsoft filed a patent, Changing An Application State Using Neurological Data, for a new technology described as a “brain control interface” that, in the form of a headband with sensors, decodes EEG’s in the brain, to launch and operate apps and web browsers with only the power of our mind.
According to Microsoft, the device would reportedly learn each user’s individual brain behavior via an intricate algorithm and would be able to detect when someone wanted to swipe, click a mouse or push a button. This device will be used in everything from video games, to modelling software and web browsers.

In other words, they want this mind-control software to be everywhere, and in everything.

Last year, Mark Zuckerberg unveiled Facebook’s augmented reality system and confirmed rumors that also were developing mind control brain interface but taking it a step further. “We’re building further out beyond augmented reality, and that includes work around direct brain interfaces that one day will let you communicate using only your mind, although that stuff is pretty far out.”

He also announced that they were developing optical sensors that would allow people to type at speeds of 100 words per minute simply by thinking; along with a radical touch interface that transmit information simply by putting pressure on skin, sort of like super braille. Zuckerberg said future phone based applications might include creating a three dimensional scene from a single two dimensional photo. It is a future where everyone wears augmented reality glasses that supplement our field of vision.

If the idea that companies that make most of their money from harvesting your personal data could also have access to your thoughts is scary – you’re smart.  What comes in can and will go out to the highest bidder.

A team of researchers at MIT’s Media Lab has taken a step along the sane path, unveiling a prototype headset that can pick up sub-vocalization – that is, the natural process of internal verbalization or inner speech usually performed when reading to aid cognition and characterized by miniscule movements in the larynx and other muscles associated with speech. Called AlterEgo, aka, a silent speech interface, the wearable uses electrodes to detect neuromuscular signals in the jaw and face to transcribe words the user does not speak aloud but reads or otherwise subvocalizes.

AlterEgo headset can use as few as four electrodes on either side of the mouth and jaw to consistently pick up the neuromuscular signals needed to distinguish subvocalized words. The electrodes are combined with a pair of bone-conduction headphones that convey information to the user with vibrations without “interrupting conversation or otherwise interfering with the user’s auditory experience”.

“The conscious and intelligent manipulation of the organized habits and opinions of the masses is an important element in democratic society. Those who manipulate this unseen mechanism of society constitute an invisible government which is the true ruling power of our country. …We are governed, our minds are molded, our tastes formed, our ideas suggested, largely by men we have never heard of. This is a logical result of the way in which our democratic society is organized. Vast numbers of human beings must cooperate in this manner if they are to live together as a smoothly functioning society. …In almost every act of our daily lives, whether in the sphere of politics or business, in our social conduct or our ethical thinking, we are dominated by the relatively small number of persons…who understand the mental processes and social patterns of the masses. It is they who pull the wires which control the public mind.”    Edward Bernays, “Propaganda”

← Christian Church has Lost Its Focus & Purpose
YHVH is His Name →