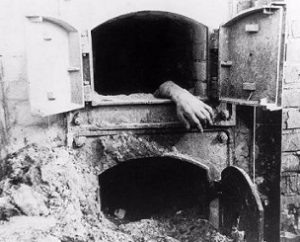 “The murderous hatred against the Jews that has accompanied the history of our people has not disappeared; it has just been replaced with a murderous hatred of the Jewish state. What has changed since the Holocaust is our determination and our ability to defend ourselves.” Benjamin Netanyahu

In an annual ritual, Israel came to a standstill at 10 a.m. Monday, April 15, to honor the victims murdered during the holocaust. While sirens wailed for 2 minutes, pedestrians stood in place, people emerged from buses and cars, their heads bowed in respect as they paid homage to the victims of the Nazi genocide in which a third of the world’s Jews were annihilated.

The world has a very short memory. The very actions that led up to the genocide of millions is once again rearing its ugly head across Europe and in the Americas. “Jews to the gas, Jews to the oven, Kill the Jews,” are still sentiments heard in the streets of Tehran and Gaza City and even far worse, in the streets of London, Paris and Amsterdam. The briskly flowing unchecked river of anti-Semitism that cut across the planet during the 1930s has been resurrected.

The overwhelming passive reaction of Europeans to the chilling calls for the mass murder of Jews on the streets of European cities suggests the presence of the anti-Semitism that existed during the 1930s and 40s. European governments, state and city authorities, academics, much of the media and European populace did virtually nothing to tamp down the hate. As a matter of fact, both leaders and citizens energetically lauded the anti-Semitic chorus. In truth, anti-Israel sentiment, the slick cousin of anti-Semitism, was and is embraced, encouraged and facilitated in the European mainstream by politicians, intellectuals and the media.

In January the Brussels Journal reported that “far from simply being a spate of isolated incidents, as many Europeans claim, anti-Semitic violence is becoming more commonplace in every country in Europe. At the same time, anti-Israel demonstrations, which have strong anti-Semitic overtones, are being held with alarming frequency in cities across Europe.”

“Jew baiting is especially intense in the UK,” wrote Isi Leiber in the Jerusalem Post. “Prominent Jews encounter death threats as Oxford students gleefully claim that in 5 years their campus will be a ‘Jew free zone.’ The London based Royal Court Theater is staging a viciously anti-Israeli play that portrays Jews as demonic Christ killers….During one demonstration in London earlier this year, participants, many of whom were native Britons, as well as police and onlookers, didn’t object to a man dressed as a Jewish caricature, replete with a mask of a long, crooked nose, pretending to eat babies.”

In France young thugs were caught on camera shouting anti-Jew epithets and smashing food products imported from Israel. In Italy, a spokesman for the Flaica-cub trade union, demanded a boycott of all Jewish shops in Rome and warned in a leaflet that goods purchased from Jewish owned stores are “tainted by blood.”

Harassment, threats and vandalism cases targeting Jews in the United States surged to near-record levels in 2017, jumping 57% over the previous year, according to a new report by the Anti-Defamation League which counted 1,986 anti-Semitic incidents, the second-highest number since the group began tracking them nearly four decades ago. Based on data from law enforcement, victims and local Jewish organizations have seen an increase in bomb threats against Jewish centers, vandalism at synagogues and Jewish cemeteries and threats at schools. Since January alone, there have been 67 bomb threats against Jewish Community Centers in around 27 states around the country. In February a Jewish cemetery in St Louis, Missouri was desecrated, with over 100 headstones overturned. There has been a large increase in online anti-Semitic threats and hate speech. Swastikas have been spray painted on the streets of New York.

Much like today, hatred toward Jews  became politically fashionable and socially acceptable in Britain and the rest of Europe during the 1930s. Historian William Manchester noted this trend in his book, The Last Lion that: “…In the 1930s it was quite an ordinary thing to see restaurants, hotels, clubs, beaches, and residential neighborhoods in Britain barred to people with what were delicately called ‘dietary requirements’….Contempt for [Jews] was not considered bad form. They were widely regarded as unlovable, alien, loud-mouthed, flashy people who enriched themselves at the expense of Gentiles.”

While Hitler was planning and carrying out the genocide of a nation, the British government, high society, the intellectual class and the media, with the exception of a handful of individuals that included Winston Churchill, were infected not only with hatred of Jews but with infatuation with Nazism. Among London’s upper crust, British women wore bracelets with swastika charms; young men combed their hair slant across their foreheads. Even King Edward admired Germany and Hitler, and did not lift a finger to curb the growing and blatant acts of anti-Semitism surging in the government and across the country.

Poland’s national character, like Germany’s was marred by a streak of anti-Semitism. Hungary enacted anti-Semitic laws similar to Germany’s that made the persecution of Jews routine. In France during the late ‘30s, rowdy crowds, alarmed by the prospect of war with Hitler and convinced that Jewish warmongers were at the root of the problem protested in towns and suburbs crying “death to the Jews, raid the Jews.”

Hatred of Jews was in vogue and enormously pervasive, so much so that the subliminal support given by British, European and American governments and society to Hitler’s anti-Jewish ideology and policies actually made the gas chamber style anti-Semitism of the 1940s inevitable.  And considering the culture of death that many have embraced in today’s society, it is not a stretch to foresee the possibility of another genocide during our time.

“If anti-Semitism is a variety of racism, it is a most peculiar variety, with many unique characteristics. In my view as a historian, it is so peculiar that it deserves to be placed in a quite different category. I would call it an intellectual disease, a disease of the mind, extremely infectious and massively destructive.” Paul Johnson

Source:  Anti-Semitism: Why You Should Be Alarmed by Brad MacDonald, the Trumpet; Anti-Semitism on the Rise Across Europe Is Worst Time Since the Nazis, by Jon Henley

← Stay Under the Canopy of God’s Favor and Protection
Other Than the Shooter, Who is Responsible for Synagogue Carnage? →