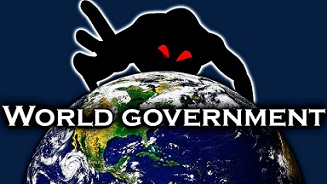 “Some of the biggest men in the U.S., in the field of commerce and manufacturing, are afraid… They know that there is a power somewhere so organized, so subtle, so watchful, so interlocked, so complete, so pervasive, that they had better not speak above their breath when they speak in condemnation of it…. We have been dreading all along the time when the combined power of high finance would be greater than the power of government…We have come to be one of the worst ruled, one of the most completely controlled and dominated, governments in the civilized world—no longer a government by free opinion, no longer a government by conviction and the vote of the majority, but a government by the opinion and duress of small groups of dominant men…. We are in a new world…. Behind the whole subject, of course, is the truth that, in the new order, government and business must be associated closely…. We stand in the presence of a revolution… (which) will come in peaceful guise.” President Woodrow Wilson, The New Freedom, 1913.

While we may never know for certain what shadow government Roosevelt was referring to, we have in New York  the product of this power, the United Nations, established by the ruling elite after WWII. The roots of the United Nations can best be compared to the deep and spreading roots of a tenacious vine. Some are short and shallow, others long and deep, firmly imbedded in social, political and financial institutions throughout the world.

Franklin D. Roosevelt’s right hand man, Alger Hiss who co-authored the UN Charter, was the leading force in designing the U.N.  As a reward for his work Churchill, Roosevelt and Stalin appointed him as the very first Secretary General at the founding conference held in San Francisco in 1945. Three years later Hiss, whom the FBI had warned Roosevelt about repeatedly, was exposed as a Communist spy and sent to prison.  According to researcher David Rivera, Hess patterned The United Nation’s charter “after the Constitution of Russia, and the Communist Manifesto.”

Part of those long deep spreading roots is that of Undersecretary General for Political and Security Council Affairs  whose duty is to control all military and police functions for the UN’s peacekeeping forces, supervise all disarmament moves for member nations, and control atomic energy entrusted to the UN for peaceful and “other purposes.”  It is no coincidence that all of the men who held this position were communist from the former Soviet Union and Russia.  According to Trygve Lie, the first elected UN Secretary General, in his book In the Cause of Peace, this was a deal agreed upon by the Big Five in London and confirmed by Soviet Politician Andrey Vyshinsky and the US Secretary of State Edward Stettinius, Jr.   Edward Griffin confirmed these accusations in his book The Fearful Master.  It should therefore come as no surprise that all organizations and agencies established by and affiliated with  the United Nations are Communist and Socialist in nature.

UNESCO, the UN Education, Scientific & Cultural Organization, was established in 1945 with Communist  Julian Huxley at its helm. In his book UNESCO: Its Purpose & Philosophy, Huxley wrote that UNESCO must be global in extent and evolutionary in background…that the transfer of full sovereignty from nations to world organizations must happen…that there must be an emergence of a single world culture.  The US joined in 1946 when the National Education Association adopted UNESCO’s philosophy and textbook recommendations.  In a January 1946 NEA Journal they wrote “at the very top of all the agencies which will ensure the coming world government must stand the school, the teacher….”

The World Health Organization (WHO) was established in 1948 under the leadership of Communist Brock Chisholm, a friend of Alger Hiss. Chisholm writes in his paper, The Psychiatry of Enduring Peace & Social Progress that parents must no longer be allowed dominion of what children learn; that the forces behind prejudice and war was parents filling the heads of their children with Christianity.  “The re-interpretation and eventually eradication of the concept of right and wrong which has been the basis of child training… these are the belated objectives of practically all effective psychotherapy. Would they not be legitimate objectives of original education? Would it not be sensible to stop imposing our own  local prejudices and faiths on children and give them all sides of every question so that…they may have the ability to size things up and make their own decisions?”

Along the same lines, UNICEF, the UN Children’s Fund, despite its benevolent image, is also a fraud. Little of the organization’s aid actually gets to the victims it claims to champion. The majority is lost to waste, corruption,  and mismanagement in its collaboration with the governments of the most brutal regimes in history. This picture of false piety and gluttonous excesses amidst the utter squalor and privation of the world’s most destitute has been confirmed by many other observers, not the least of whom is British journalist and former UNICEF consultant Graham Hancock, author of The Lords of Poverty: The Power, Prestige and Corruption of the International Aid Business.

Always an enthusiastic proponent of aid to totalitarian communist regimes, UNICEF has lavished millions on our worst enemies. In a 1975 column, “UNICEF Aided Vietnam Fall,” columnist Robert Heinl exposed their treachery in aiding the bloody handed Ho Chi Minh.  Their Treaty, the Convention on the Rights on the Child, is also a trap, a deceptive appeal of concern to conceal the UN plan to subvert parental rights and transfer increasing authority over our children to the collective, global community. Seen in the light of the terrible potential of this treaty, UNICEF’s slogan, “Every Child Is Our Child,” takes on a very chilling meaning.

And don’t for one minute believe that the United States is not party to the deception. State Department Publication 7277, Freedom From War, The U.S. Program for General and Complete Disarmament in a Peaceful World, released in September 1961 during JFK’s administration, is still official US government policy.  7277 calls for the “disbanding of all national armed forces and the prohibition of their reestablishment in any form other than those required to preserve internal order.”  Our government’s official policy is the elimination of all militaries, including our own, to be replaced by a UN Peace Force.

The United Nations is the greatest fraud in history instituted to destroy the United States. Behind the mask of peace, brotherhood, and universal understanding, the UN promotes terror and tyranny in order to achieve its real objective, a one- world government.   The concept of a one-world government is not new. Winston Churchill said, “The creation of an authoritative world order is the ultimate aim toward which we must strive,”  and Charles De Gaulle was convinced that “Nations must unite in a world government or perish.”

What we see happening to our nation to day is the results of years of Communist infiltration via the United Nations into every aspect of our lives, leading to the establishment of a global community under the control of the world’s wealthy elite.