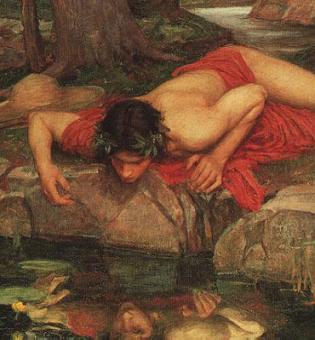 Do you remember the story of Narcissus, that handsome Greek fellow  punished by the gods for his indifference and disdain toward others? Narcissus fell in love with his own beauty, and unable to tear himself away from his own reflection in a pool of water, he wasted away and died.

If you’re not familiar with the term, narcissism is a personality characteristic associated with self-absorption, an overestimation of one’s own importance and abilities, a sense of entitlement and a total disregard for others. Sound familiar?  And this time I’m not even talking about our current ruling elite, I’m talking about our children. How in the heck did we manage to not only raise an entire generation of narcissist, when did we become a culture that not only accepts it but promotes it as the norm?

In 2013, Psychologist Dr. Jean Twenge, and colleagues, did a comparative study of a yearly survey taken of over 9 million freshmen over the last 47 years, and found that college students are more likely than ever to call themselves gifted and driven to succeed, even though their test scores and time spent studying are decreasing since the 1960s. A college degree is now the career equivalent of what a high school diploma used to be.

One obvious place where young people are learning about narcissism is from popular culture.

A study by psychiatrist Dr. Drew Pinsky in which 200 celebrities completed the Narcissistic Personality Inventory, found that they were significantly more narcissistic than the general population. Surprised? He did discover however that those that had a real talent tended to be less narcissistic than say those famous for being famous.

Another study explored music lyrics over the last thirty years and found a significant shift toward the ‘I’ and ‘me’ more than the ‘we’ and ‘us,’ and away from positive to angry in words and emotions.

Narcissism is also promoted by the time spent immersed in social media sites such as Facebook –  that mythical world where anyone can fool themselves into thinking they have hundreds of thousands of friends and the power to block [silence] those that disagrees with them; or Twitter, where everything that pops into your head is important to those pretend real-life fans, with the same delusions.

Jim Taylor, Ph.D. also believes that the shift toward hyper-parenting aka helicopter parenting is also contributing to this increase in self-adoration. “Helicopter parenting,” refers to a style of parents who are overly focused on their children, in a way that is over-controlling, over-protecting, and over-perfecting, far in excess of responsible parenting. I’m sure you’ve run into a few of them during your child’s sports game or at school meetings. A 2013 study in the Journal of Child and Family Studies found that college kids who experienced this type of parenting reported higher levels of depression and the use of antidepressant medication. According to the researchers, intrusive parenting interferes with the development of autonomy and competence.

I also believe part of the problem is the government school system where children are no longer an individual but part of a collective society, where they are not allowed to fail, where everyone gets a trophy or prize or no one gets it, because we don’t want them to feel bad. Kids are taught to memorize answers and spit them out on command, not to question or find new answers or think critically or offer creative solutions, or even express an opinion that isn’t politically correct. Our kids are not allowed to fail and failure can be a powerful learning tool.  And all that time spent on computer games, Facebook, or Twitter deprives children of play, of face-to-face interaction needed to develop social skills, such as empathy, compassion, and consideration for others, which counters narcissism.

This lack of empathy for others may explain why there is a trend on college campuses for acceptance of killing a child after they are born up to the age of 4 or 5. Once you turn a whole generation into narcissist that believe it is moral to murder an innocent baby before it is born, why should anyone be surprised that they would believe it is immoral to kill them after birth? Just think, this is the generation of future bureaucrats who will be administering ObamaCare!