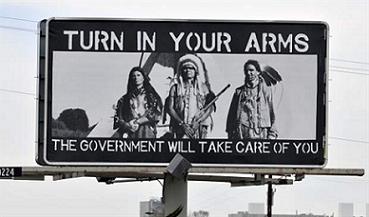 The right to keep and bear arms is anathema to an ever-growing anti-gun lobby, united in their belief that guns are the root cause of the senseless violence that has become so common in contemporary American society.

There are members of this anti-gun lobby who sincerely, if naively, believe that eliminating guns will eliminate violence, cementing their belief on the basis of emotion.   They are not likely to be swayed by facts which positively prove that gun violence actually decreases when citizens are allowed to own and carry firearms because an armed person is less likely to become the victim of a criminal or mass murderer.

Then there are those anti-gunners who form their opinions based on desperation. This group, a subset of the emotion driven anti-gun group, often pop up in the aftermath of the senseless, brutal mass murders that have become an unfortunate aspect of life in America.

There is no disagreement among lawful gun owners and the left that something must be done to stop the violence. What we disagree on is the method.   Those on the left wish to totally disarm American citizens, or make gun ownership more restrictive through various strategies such as extensive background checks. To that I say, confiscate all guns and say hello to terrorists, thugs, gangs, and tyrants running amok in America’s cities.   Adding extra layers of regulations to gun ownership does nothing productive.   Criminals, by their very nature, do not obey laws.

They even quote the liberal Supreme Court Justice John P. Stevens who claimed that the Second Amendment doesn’t apply to private citizens and suggested that it be altered with five little words – “when serving in the militia”, shall not be infringed.  Thankfully the Supreme court has already rendered this argument null and void in District of Columbia v. Heller, ruling that the Second Amendment empowers citizens to keep a handgun.

Another means to push the gun control is the Common Core Standards being taught to our children.   According to Common Core teaching aids, the Second Amendment “… states that people have the right to certain weapons, providing that they register them and they have not been in prison.” Gee, I don’t remember reading that in the Constitution.

Let’s be honest.   Anything can become a weapon in the hands of a crazed killer. Box cutters, baseball bats, homemade bombs ignited by cell phones, knives, ropes, rocks, bricks, metal pipes, hammers, chain saws, shovels and even trucks and cars. And what about the suicide missions of crashing planes into buildings or drunks causing accidents or trains derailing.

The Second Amendment was created to give citizens the opportunity to fight back against a tyrannical federal government.   In Federalist Paper 28, Alexander Hamilton expressed that when “government betrays the people by amassing too much power and becoming tyrannical, the people have no choice but to exercise their original right of self-defense, to fight the government.” In Paper 29 he wrote that “an armed citizenry was the best and only real defense against a standing army becoming large and oppressive.”

In Federalist Paper 46, James Madison contended that “ultimate authority resides in the people,” and that if the “federal government got too powerful and overstepped its authority,” then the people would “develop plans of resistance and resort to arms.”   In The Papers of George Madison, 1725-1792, we read that he asserted that history had demonstrated that the most effective way to enslave a people was to disarm them and suggested that divine providence had given every individual the right of self-defense, clearly including the right to defend one’s political liberty within that term.

James Madison made clear that, although the proposed Constitution offered sufficient guarantees against despotism by its checks and balances, the real deterrent to governmental abuse was the armed population. Pamphlets of the Constitution Published During Is Discussion By the People 1787-1788

With private firearm ownership at an all-time high and violent crime rates plunging, none of the scary scenarios the leftist gun-control nuts toss out has materialized. Abuse of responsibility by armed citizens is rare, while successful defensive interventions against assaults on their lives and property are relatively commonplace. Fewer than 1% of all legally purchased firearms will ever be involved in a violent crime verses 100% of firearms obtained by criminals which no amount of restrictive laws and regulations will ever prevent.

“Don’t think of it as `gun control’, think of it as `victim disarmament’. If we make enough laws, we can all be criminals. The possession of arms by the people is the ultimate warrant that government governs only with the consent of the governed.   As the Founding Fathers knew well, a government that does not trust its honest, law-abiding, taxpaying citizens with the means of self-defense is not itself worthy of trust. Laws disarming honest citizens proclaim that the government is the master, not the servant, of the people.”  Jeff Snyder

← America: The Old Cowboy that Rides Off into the Sunset
America Calls for the Head of John the Baptist →