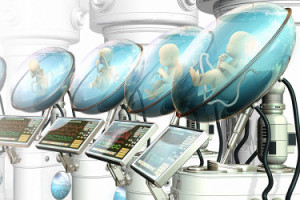 Even with the millions of unborn babies murdered each year in the name of progress, the far-left is not convinced that it is enough.   Now they would have us believe that to save the planet we must do more than just murder – we must limit the births of those women who are still having babies.

The Journal of Medical Ethics (and I mean ethics in the loosest of terms) published an article by Christina Richie of Boston College’s Department of Theology that argues that artificial reproductive technologies should also be regulated to save the planet from global warming. After all, those nasty little urchins are nothing more than “carbon legacies” that, when a woman chooses to procreate, will destroy the earth.

Artificial reproductive technologies (ART) according to Ms Richie, are not regulated enough.  They allow multiple children to be born who might not exist without medical intervention, adding to worldwide carbon emissions, that burdens an already over-taxed ecosystem. Therefore, it is the obligation of environmental policymakers (the wealthy elite) and society as a whole to regulate any industry that can help women bring unwanted carbon legacies into the world.

As Richie is arguing to prevent births to save the planet, far-left scientists are working on another angle to stop those little carbon legacies – artificial wombs.

The current argument for “ectogenesis” is the ability to save premature babies that could not survive outside the mother’s womb, or as a means for mothers facing ectopic pregnancies to transplant their tiny babies into a “safe” environment to grow and develop, or as an alternative to abortion.   If used to only save babies, it would be more than a miracle, but look around you – how much has the left promoted as good for society that has actually turned out to be good for anyone other than their own  distorted agenda?

Feminist Shulamith Firestone in “The Dialect of Sex” writes that “biological reproduction roles are a source of inequality between genders. An artificial womb would “free women “ from the tyranny of their reproductive biology.”  Another far-left blogger, writing at a pro-abortion website, noted that ectogenesis as a medical benefit could also be used to provide a “steady supply of spare parts” that could be harvested from bottled embryos.”  Bless her heart! Ain’t she special?

The moral, ethical, legal and unintended consequences are profound. The meanings of words like “life,” “human,” “embryo,” “natural,” and even “mother,” that we’ve historically relied on to make ethical decisions are dissolving faster than society is adapting. What would it mean to society to separate human birth from the human body?

Already scientists have successfully gestated goat embryos in tanks filled with amniotic fluid. In 2003 Cornell University grew a human embryo, a living human being, for 10 days inside an artificial womb, before murdering it to comply with legislation governing human embryonic testing.

The legal and ethical consequences of ectogenesis, unlike IVF and surrogacy, both of which require a woman to give birth, raises the possibility of external gestation whereby an embryo could be implanted directly into an artificial womb. If perfected, it would give the government or a bunch of unelected bureaucratic demi-gods, ultimate power over men and women’s reproductive rights: the ability to control earth’s population; and thus, the ability to control mankind.

“What are the psychological implications of growing up as a specimen, sheltered not by a warm womb but by steel and glass, belonging to no one but the lab technician who joined together sperm and egg?” Jeremy Rifkin. What indeed!

← When Are Christians Going to Care About This?
Killing Trump is Deep State’s “Plan C,” Warns Advisor Roger Stone →