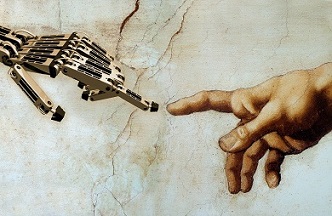 “Unless we learn how to prepare for, and avoid, the potential risks, AI could be the worst event in the history of our civilization. It brings dangers, like powerful autonomous weapons, or new ways for the few to oppress the many. It could bring great disruption to our economy.” Stephen Hawkins

In 2017, author Dan Brown, while pushing his new book, Origin, was quoted as saying “Humanity no longer needs God but may with the help of artificial intelligence develop a new form of collective consciousness that fulfills the role of religion.” He actually forecast the “emergence of some form of global consciousness…that becomes our divine.” Apparently he isn’t the only one who foresees the future of mankind as bleak.

Anthony Levandowski, a former Google and Uber executive, has appointed himself the “Dean” [prophet] of a new religion he loving calls the Way of the Future, which he describes as the “acceptance and worship of a godhead based on Artificial Intelligence developed through computer hardware and software.” Before you laugh, the IRS has already recognized and granted the Way a religious exemption.

“With the internet as its nervous system, the world’s connected cell phones and sensors as its sense organs, and data centers as its brain, the ‘whatever’ will hear everything, see everything, and be everywhere at all times. The only rational word to describe that ‘whatever’ is ‘god’—and the only way to influence a deity is through prayer and worship.”

The Way will have its own “gospel” called the “Manual,” which Levandowski is actively writing, its own religious ceremonies and at some time in the future, an actual building.  Of course that requires money which Levandowski hopes to attract as he gains new converts through education and community outreach to members of the AI community and laypersons interested in worshipping a new godhead.  Unfortunately, in California that really shouldn’t be too hard.

Neuroscientist and philosopher Sam Harris believes that at some time in the future, it will be possible to create a machine that is smarter than we are and if that happens, it is also possible that these created machines will begin to improve themselves, risking what the mathematician IJ Good called an “intelligence explosion.” It’s not that our machines will become spontaneously malevolent. The real concern is that it will get away from us, that we will build machines more competent than we are and the slightest divergence between their goals and our goals could easily destroy us.

Image, he writes, if we hit upon a design of AI that appears to create no safety concerns, it would be as though we’ve been handed an oracle that behaves exactly as intended. Well, this machine would be the perfect labor-saving device. So, we’re talking about the end of human drudgery. We’re also talking about the end of most intellectual work. Now, that might sound pretty good, but ask yourself: what would happen under our current economic and political order? It seems likely that we would witness a level of wealth inequality and unemployment that we have never seen before. Absent a willingness to immediately put this new wealth to the service of all humanity, a few trillion Aires could grace the covers of our business magazines while the rest of the world would be free to starve.

“For my people is foolish, they have not known me; they are sottish children, and they have none understanding: they are wise to do evil, but to do good they have no knowledge.”  Jeremiah 4:22

Machines are a product of humans – not a replacement, nor will they ever be. And to imply that we will create machines to reason as humans must have God rolling in the isles. Machines will never surpass their creators just as mankind will never surpass God. To believe otherwise is sheer arrogance.

”Ideology is to mold reality into a scheme consistent with a posited or assumed idea. It embodies the philosophical error of thinking that the world is in us, rather than that we are in the world, or that the box is in the shoe, rather than the shoe is in the box. The examples may sound silly, but a real look at the past will bear out the reality that ideologies are not only dangerous, but deadly in their attempts to forcibly reduce reality into a set of inflexible ideas wholly unsuited to their application.” Eric Vogelin

← “Separation” of Church & State? – Or Castigation of Religion?
The Fight for Free Speech →