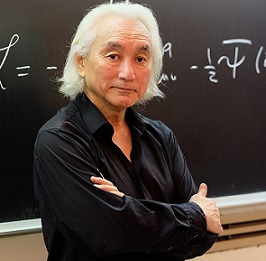 Michio Kaku, an American theoretical physicist, was quoted in an article as saying he had found definite proof of the existence of God.  To come to this conclusion, the article said that Kaku had used what he called the “primitive semi-radius tachyons,” which are theoretical particles capable of unsticking the Universe matter or the vacuum space between particles which leaves everything free from the influence of the universe that surrounds them.

As quoted by Catholic.org, Kaku said he had concluded that “we are in a world made by rules created by an intelligence…everything that we all chance today won’t make sense anymore…it is clear that we exist in a plan which is governed by rules that were created, shaped by a universal intelligence and not by chance.”

After the article was published, Professor Kaku said he had been misquoted.  He said that to his point of view you can “neither prove or disprove the existence of God. Science is based on what is testable, reproducible and falsifiable. …certain things that are not testable, not reproducible and not falsifiable. And that would include the existence of God….Personally, I think there’s much wisdom in the God of Einstein.”

Cofounder of string theory, the idea that our universe is but one of many universes, professor Kaku like Einstein, leans more toward agnosticism and/or pantheism spiritually. Pantheism is the belief that the Universe is identical with what we call God. Agnosticism is the view that human reason is incapable of providing rational claims to justify God’s existence.

Einstein basically said that there are two types of gods. One is a personal god, the God you pray to, the God that smites the Philistines, the God that walks on water. The other is the god of Baruch Spinoza who argued that everything is a derivative of God, interconnected with all of existence. According to professor Kaku, “when scientists use the word God, they usually mean the god of Order,” the god of Harmony and beauty, the god of Spinoza.

Denying he was an atheist or a pantheist, Einstein explained that  “We are in the position of a little child entering a huge library filled with books in many languages. The child knows someone must have written those books. It does not know how. It does not understand the languages in which they are written. The child dimly suspects a mysterious order in the arrangement of the books but doesn’t know what it is. That, it seems to me, is the attitude of even the most intelligent human being toward God. We see the universe marvelously arranged and obeying certain laws but only dimly understand these laws. Our limited minds grasp the mysterious force that moves the constellations.”

According to Professor Kaku “physicists are the only scientists who can say the word “God” and not blush. The fact of the matter is that we are dealing with the cosmic questions of existence and meaning. Thomas Huxley, the great biologist of the last century, said that the question of all questions for science and religion is to determine our true place and our true role in the Universe. For both science and religion it is the same question. However, there has essentially been a divorce in the last century or so between that of science and the Humanists and I think that it’s very sad that we don’t speak the same language anymore.”

Modern science has not been able to reveal why the universe came into existence nor what preceded its birth in the “Big Bang.” Biological evolution has not brought us the slightest understanding of how the first living organism emerged from inanimate matter or how the eukaryotic cells, the highly structured building blocks of advanced life forms, ever emerged from simpler organisms. Nor has it been able to explain one of the greatest mysteries in science – how did consciousness arise in living things? What is it that allows humans to understand the mysteries of biology, physics, math, engineering and medicine or enables us to create great works of art, music, architecture and literature?

Theories concerning the mechanistic origin of the universe come and go. Today’s “science” is tomorrow’s superstition. A few years ago scientists were touting the steady-state theory that asserted that new matter is constantly being created to replace that which is lost by the expanding universe, as the most reasonable explanation of the origin of the universe. Today most astronomers regard the steady-state theory as dead.”

Common sense should tell you that there has to be a higher power behind the infinitely complex design of the universe and everything in it. Everything has been so precisely calculated and controlled. Through faith we understand that the universe is not self-existent but rather designed by the Creator. Faith chooses the spiritual over the material, the eternal over the temporal. Faith is not merely a mental conviction. Logic and faith are companions.

“The scientist has scaled the mountain of ignorance, he is about to conquer the highest peak; and when he pulls himself over the final rock, he is greeted by a band of theologians who have been sitting there for centuries.” Robert Jastrow, NASA scientist