During the 70’s the environmental movement was about saving the earth. 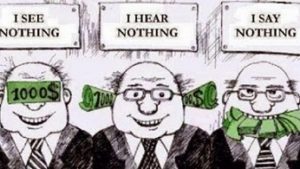 Unfortunately, as greed thrust itself into the movement, the battles became more about lining the pockets of left-wing bureaucrats and radical left-wing organizations than about saving anything.

A July 2014 Senate Minority Staff Report “The Chain of Environmental Command,” chronicles how today’s battles pit the poor, minorities and blue-collar families against the far left Billionaires Club and the radical environmental groups it supports and directions, in collusion with federal, state, and local bureaucrats, politicians, judges, big corporations and sell-out scientists who profit from the scams.  This report is a must read.

The Billionaire’s Club achieved many of its successes by securing key positions within the Obama administration, especially at the EPA which has been deliberately staffed at its highest levels with far-left environmental activists who have worked hand-in-glove with former radical colleagues at the expense of farmers, miners, roughnecks, small businesses, and families. The “green-revolving door” at EPA has provides valuable insider access to important policy decisions and the ability to funnel taxpayer money in the form of grants to former employers and colleagues.

Federal agencies, which wield significant amounts of delegated power such as the EPA, should be staffed with neutral experts dedicated to serving the public interest. However, recent reports of alleged collusion between environmentalists and EPA senior officials have made apparent the Obama Administration’s failure to abide by this most basic principle of executive branch governance. In fact, the report exposes Obama and his EPA as pivotal partners in the far-left environmental movement.

The report also goes into detail on how the Billionaire’s Club is using tax-free money to create and push out propaganda disguised as science and news. For example, both the Park Foundation and the Schmidt Family Foundation have financed questionable scientists to produce anti-fracking research, which the far-left media, such as the Huffington Post, Mother Jones, and Climate Desk, all grant recipients themselves, eagerly report on.

The “Club” has perfected the craft of assembling fake grassroots movements, funded by foundations outside the states they seek to influence, to assist in ballot measures and other state initiatives attacking jobs, economic development, and infrastructure projects. An example is The Energy Foundation, a quintessential pass-through nonprofit frequently employed by the Billionaire’s Club to receiving money from several key foundations and redirecting it to left-wing activists. Pass-through fronts not only provide distance between the donor and the activist group but the ability to pool funds while remaining in the shadows. One of the major funders of the Energy Foundation is Sea Change, which goes to extraordinary lengths to hide the source of their money.

The Billionaire’s Club is also adept at converting non-taxable donations into the political arena by taking advantage of loopholes in the tax code. For example, in many cases they fund a 501(c)(3), like the Energy Foundation or the League of Conservation Voters, which then transfers large sums to an affiliated 501(c)(4), which can legally engage in political activity. The affiliated groups often share office space, staff, and even board members.

Green Tech, in turn, donated heavily to at least three 501(c)(4) far-left environmental activist organizations during the 2010 and 2012 election cycles: the League of Conservation Voters, Sierra Club, and the BlueGreen Alliance which groups gave predominantly, if not entirely, to Democrat candidates for office.

A shadowy network of elite billionaires that include the Rockefellers and Bill Gates, aided by the federal powers-that-be, have seized control of our government and are pushing a radical left-wing big green scam for no other reason than to line their own pockets at our expense.

As Alex Newman writes at the NewAmerican, under the bogus guise of “philanthropy” with little scrutiny from the IRS, this network of billionaires goes to great lengths to conceal its activities and insulate itself from the damage it is doing to our country.

These mega wealthy elite, operating lawlessly and in cohorts with the current ruling powers have erected a swarm of AstroTurf groups that literally dominates environmental policy in the US through control of the EPA and together, they are undermining free enterprise and resource security.

← Contemplating Mass Murder – Is There A Pattern?
DON’T DO SOMETHING, DO THE RIGHT THING →