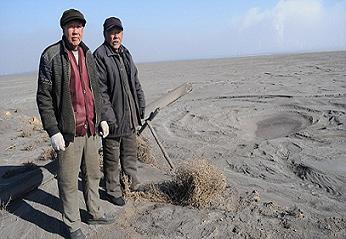 Wind energy is not nearly as “clean” and “good for the environment” as the Green Over-Lords want you to believe.

The wind industry is dependent on rare earth minerals imported from China, the procurement of which results in staggering environmental damages.

Joined at the hips with the United Nations, the Green-Over Lords continue to promote and push wind turbine energy as a needed “green” alternative far more environmentally friendly than fossil fuels that produce CO2. They don’t want you to question the validity of their claims because knowledge is power.

They especially don’t want you to know of the vast amount of radioactive waste and other toxic substances that results from the mining of rare earth minerals needed to manufacture wind turbines. According to the Bulletin of Atomic Sciences a 2 megawatt turbine contains about 800 pounds of neodymium and 130 pounds of dysprosium.  “To qualify this in terms of environmental damages, consider that mining one tone of rare earth minerals produces about one ton of radioactive waste,” according to the Institute for Analysis of Global Security.

Neodymium is found most often in monazite and bastnasite and due to the fact that these minerals also contain lantanides and other rare earth elements, neodymium must be extracted using sulphuric acid, hydrocholoric acid and sodium hydroxide.  To further isolate the neodymium,  procedures such as solvent extraction and ion exchange are used.  Once reduced to its fluoride form, it can be reacted with pure calcium metal in a heated chamber to form pure neodymium and calcium fluoride.  It is an expensive and environmentally harmful process that poisons the soil for decades.

Simon Parry of Britain’s Daily Mail traveled to Baotou in northern China to view the mines, factories, and dumping grounds associated with China’s rare earth industry, including a 5-mile-wide lake of industrial waste.  “This vast, hissing cauldron of chemicals is the dumping ground for 7 million tons a year of mined rare earth after it has been doused in acid and chemicals and processed through red-hot furnaces to extract its components.  Rusting pipelines meander for miles from factories processing rare earths in Baotou out to the man-made lake where, mixed with water, the foul-smelling radioactive waste from this industrial process is pumped day after day.”

There’s not one step of the rare earth mining process that is not disastrous for the environment. That the destruction is mostly unseen outside of China does not make it any less damaging.

As the lake of waste grew larger, local farmers told Parry, “anything we planted just withered, then our animals started to sicken and die.”  Residents of a nearby village said their teeth began to fall out, their hair turned white at young ages, and they suffered from severe skin and respiratory diseases. Children were born with soft bones and the incidence of cancer and osteoporosis soared.   The lake of waste’s radiation levels are 10 times higher than in the surrounding countryside, official studies found.   In Baotou, most people wear face masks wherever they go, Parry noted.  That is the true face of green.

In 2012 alone, the United States added 13,131 megawatts of wind-generating capacity, using at least 4.9 million pounds of rare earths minerals, meaning that at least 4.9 million pounds of radioactive waste were created to make those turbines.  In comparison, the U.S. nuclear industry produces between 4.4 and 5 million pounds of spent nuclear fuel each year. In other words, the  U.S. wind industry most likely created more radioactive waste last year than America’s entire nuclear industry — while accounting for just 3.5 percent of all electricity generated in the country.

Even if wind power curbed CO2 emissions, which it doesn’t, wind installations injure, maim, and kill  thousands of birds  each year including bald and golden eagles, both protected species, in clear violation of federal law.   While all energy sources impact the natural environment in some way, affordable, abundant gas, oil, and coal generated energy has made life for billions of people much better than it ever was.

I can’t say the same for the mining of rare earth minerals.

← Violence Solves A Lot
The Insidious Semantics of “Gun Control” →