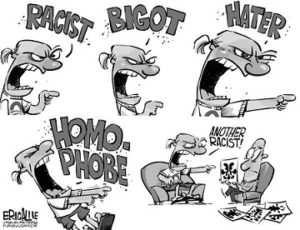 The left loves to push racism because it is easier to divide a nation than offer solutions to rectify the problems their policies have created.

In an article for Time Magazine, Racism is Poisoning our Society, Sharon Watkins writes that “Racism is more than what is in the heart of an individual person at the moment of a particular act. Racism is the cumulative history of all those thoughts and acts. They add up to a pattern in which people of color are routinely and systematically treated differently than white people.”  Dr. Watkins is the president and general minister of the Christian Church (Disciples of Christ), a small, liberal-leaning Protestant denomination and serves on the Board of Sojourners, another left-wing, feel good denomination.

Racism, while once easy to define has today all but lost meaning. Words are supposed to have definitions!  There are those on the left that toss the word around freely to either shut up their opponents, tarnish someone’s reputation and credibility, or control the masses, hoping to cow dissenters into silence.  For instance: The New York Times editorial board says that many of the nation’s police see black men as “expendable figures” on the “urban landscape, not quite human beings.”

During her unsuccessful presidential campaign, Hillary let the world know that “half” of Trumps’ supporters were a “racists, sexist, homophobic, xenophobic, Islamophobic basket of deplorables.” Obama played the race card for eight years on everything from his “shovel ready” stimulus to the anything but affordable health care act.

One of the broadest, most persistent allegations of racism has been directed at more than 65 million white Americans who live in the South. For more than 40 years elitist academics, commentators and fake news journalist have proclaimed that white Southerners are more likely to vote for Republicans than Democrats because we are racist and everyone knows the Republican party appeals to racist. As the story  goes, when the Democratic Party “embraced” civil rights, white racists rushed to the Republican Party. This supposedly took place after a hundred-year period (1865-1965) during which:

–  Democrats repeatedly supported the KKK, many of whom were themselves members, while Republicans fought them legislatively and physically passing and enforcing a litany of civil rights laws over the objections of Democrats who enacted laws that effectively banned most black people from voting in the South.

–  President Woodrow Wilson, a Democrat, forced white and black federal employees into different cafeterias, bathrooms and work areas.  He also fired and demoted black federal workers who have been hired and promoted under Republican presidents.

–  Democrats passed “New Deal” laws with provisions that discriminated against minorities, some of which Republicans later were able to revise to forbid racial bias.

–  Democrats in some states explicitly banned black people from participating in their primary elections.

–  Some of the nation’s most infamous segregationists, such as George Wallace, Bull Connor, Lester Maddox and Orval Faubus, were life-long Democrats.

In a 2015 draft paper, Princeton professor Llyana Kuziernko and Yale professor Ebonya Washington took a unique approach to the issue of measuring racism among Southern whites. They focused on polling data from a question that Gallup had been asking Americans since 1958: “If your party nominated a generally well-qualified person for president who happened to be black, would you vote for him?”  When these “impartial” professors ran the data through several equations along with other data showing a 20% drop in support for Democrats among Southern whites between 1958 and 2000, they concluded that 75% of this decline in support for Democrats was due to the racist attitudes of Southern whites.  When Just Facts requested the raw data from the professors they were ignored. However, they were able to obtain the start and endpoints of this Gallup data from another source, and surprise, the data showed that between 1958 and 1999, the portion of white Southerners willing to vote for a black president increased from 8% to 95%.

There are many reasons why Southerners don’t vote Democrat that have nothing to do with racism. For instance, the South has the highest gun ownership rate of any region in the nation and we know how much Democrats love the 2nd Amendment. The South has the highest rate of evangelical Christians in the country so the Democrat’s support for funding the murder of unborn babies is a bone of contention. Comparing our rebel flag and confederate monuments with the swastika isn’t winning any love from the South either.

Of course there will always be real racists among us but today it has more to do with a political agenda than with the color of our skin. Racism is racism, no matter who plays the card. There is just as many racists who live north of the Mason-Dixon line – they just don’t have cute accents.

Let’s get this straight, “Bubbas” are NOT racist assholes who think that on the 8th day God created the Remington .45 so that Man could kill the dinosaurs and the homosexuals. Virginia Belle

← 2020: A Year of Chaos, a Year of Clarity
A Messianic Jewish Reflection on Antisemitism →