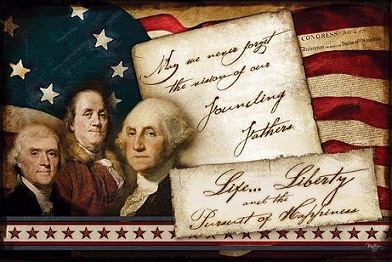 “God grants liberty only to those who love it, and are always ready to guard and defend it.”  Daniel Webster

Loving, guarding, and defending liberty is the full-time responsibility of every American.   Unfortunately, not every American loves freedom enough to guard and defend it.   In fact, many Americans are actively engaged in the pursuit of ideas and principles that are diametrically opposed to liberty.   And sadder still is the fact that many of these people would call themselves “Christians.”

If 21st century Christians are truly concerned about the present crisis confronting America, they must set about to restore our nation with the same evangelical zeal that inspired Patrick Henry and Samuel Adams.   As in the founding of America, the Christians must be the ones who light the fire and raise the standard.  Others who are “more wise in their own generation than the sons of light” (Luke 16:18) may be drawn to this cause and see our standard as holy and just.

We cannot win the battle to preserve American liberty by attempting to make the truth more palatable to a postmodernist mindset. We can only win by raising the standard and calling others to reach for it.   And we must do this with a sense of urgency.

Unfortunately, many modern churches and so-called Christians have abandoned God and  have become too comfortable with a materialist and pluralistic society.   Like the church at Laodicea (Rev 3:15), many have become “neither hot or cold.”

Today, the principal “ism” reflected in most churches is secularism which teaches that all life, all values must be understood in the here and now.  If there is a God, secularism declares Him irrelevant. In the secular world man is not created in the image of God – humans are the outgrowth of an evolutionary process and  because there is no hope of life beyond this physical existence, man is his own savior and redeemer, the only one who can decide what is right or wrong, good or evil, legal or illegal. They deny the transcendental nature of man; that humans are created in the image of God and indebily stamped with a spiritual purpose and moral identity.

Main line demoninations have given themselves over to a traditional, unscriptural teaching:   Christ taught socialism – same-sex marriage is okay – homosexuality is normal – abortion is a “right”  – absolutes are out,  all paths lead to the same god – we  must compartmentalize  our Christian beliefs in order to become more tolerant of the secular world.   Nothing could be further from the truth.

Instead of being the salt that savours and the light that shines out of darkness (Matt. 5:13-16) we have assisted secularists in erecting  the “wall”  between the church and state.   Thinking it is our “duty” to cave to tolerance we have partnered with  secularists in the elimination of God from all government and most of society.

Socialism, Fascism, Nazism, Communism, Collectivism, and New Age Liberalism, all the offshoot of the same idea, teach that man can achieve an earthly utopia through his rebellion against God.  Jesus Christ clearly taught that the highest and greatest good was not the progress of mankind, but the Kingdom of God.  That what was morally right was obeying the will of God, and what was morally wrong was  disobedience to the will of God.

Russian novelist Fyodor Dostoyevsky wrote that: “If God does not exist, then everything is permitted.”   He was right – look around you!  We are abandoning God and are losing the very best of our American heritage and our freedoms.

← What We Learned from the Bloomberg Effect in Virginia
Time to be David and defeat Goliath! →