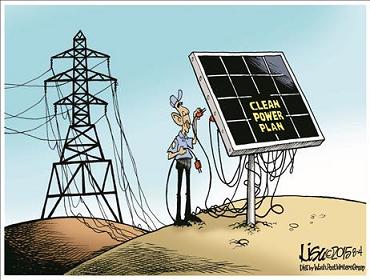 In his Encyclical on the environment released earlier  in 2015  Pope Francis  highlighted that a “throwaway culture” harms both social and physical ecology.   “When we fail to acknowledge as part of reality the worth of a poor person, a human embryo, a person with disabilities – to offer just a few examples – it becomes difficult to hear the cry of nature itself; everything is connected.”

On that respect I have to agree with the Pope but that is where I draw the line. His statement that “the earth, our home, is beginning to look more and more like an immense pile of filth,” is not based in fact or science.

As Front Page Magazine noted in their article Sorry Pope Francis, the State of the Planet is Getting Better, “if its covered in trash, it’s a strange kind of trash that has caused global crop yields to increase by 160% since 1961 and deaths from droughts to be reduced by 99.8% since the 1920s.

“Mistreatment” of the earth over the life of the Industrial Revolution has resulted in the global life expectancy rising from 26 years in 1750 to 69 years in 2009. Earth’s population increased from 760 million to 6.8 billion and incomes (in real dollars) rose from $640 to $7,300 during the same period.

The Pope’s view on climate science and its alleged “solutions” are not part of the faith or moral teachings of the church. When he speaks on climate change, he is not speaking authoritatively on Catholic doctrine, only offering an opinion, an opinion unfortunately lead by fake science.

Dr. William Briggs, a noted climate statistician noted that “most of the scientific claims cited in the Pope’s encyclical are not true.” For example, “the claim that the world’s temperature has been increasing is demonstrably false; it hasn’t and not for almost two decades. Another is the claim that storms are increasing in size and strength, also false. Indeed, the opposite is true. Another is the claim that thousands of species are going extinct. Again, false and easily proved to be so.”

Unfortunately the Pope has chosen to listen only to a brew of anti-Capitalist, pro-population control advocates who are way out of the mainstream of even the global warming establishment, many of whom are even at odds with the Catholic Church’s doctrine and beliefs on such issues as population, contraceptives, abortion and euthanasia.

Pope Francis has also urged Catholics to pray for the passage of the UN climate treaty, to “ask God for a positive outcome” for the Paris UN agreement, essentially implying that God is smiling upon the treaty process.   Which is far from the truth. God would never smile upon Socialism or Communism which essentially is what the UN climate treaty is all about.   The treaty includes heavy doses of development restrictions, promotion of contraceptives, population control, abortion, euthanasia, redistribution of wealth, the destruction of fossil fuels, and lots of new taxes, none of which would help the poor.

Fossil fuels and capitalism have brought greater health and well-being to more people than any other system in history. By denying the world’s poorest access to cheap energy, jobs and economic growth, the UN’s agenda will sentence them to perpetual poverty, disease and early death.   Mandating the use of biofuels, wind turbines and solar panels will turn food into fuel, increase malnutrition, convert wildlife habitats into enormous inefficient energy facilities and kill countless millions of birds and bats.

This fake climate change agenda, driven by the left,  the socialist U.N. and now the Pope, means that the huddled masses will be forced to share an ever-greater scarcity, ever-lower living standards, ever-fewer jobs and opportunities. But, of course, not to worry.

The redistribution of the Western world’s wealth will be apportioned “fairly and equitable by the ruling elites and their cronies, whose desk jobs, six-figure salaries and upper crust life styles will ever be protected by the same executive powers they employ to protect the planet from climate raptors and hobgolbins.