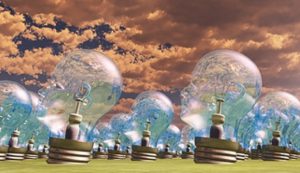 “Good intentions will always be pleaded for every assumption of authority. It is hardly too strong to say that the Constitution was made to guard the people against the dangers of good intentions. There are men in all ages who mean to govern well, but they mean to govern. They promise to be good masters, but they mean to be masters.” Austin Frank, Against Better World-ism

Governments are not the primary forces for good in the world, and when they try to be, they often wind up being just the opposite. So why would anyone want to be trapped into the utopian ideal of worldism?  The whole idea is ridiculous. Today’s world knows less and less about how to think, act or live. Its orthodoxies become less connected to reality, its ways of thinking more narrow, chaotic, and deadening. Look no further than social media or our governmental educational system or what passes for entertainment or journalism!

The world is awash in mindless distraction, the Internet is turning our brains into mush, and the ruling elite openly embrace violence. We have set ourselves adrift from God, history, human nature and reality; the result of which is a culture that doesn’t work, a culture where family and local community falls apart, a culture where the murder of innocent babies is praised, a culture where stupidity and ignorance have become a virtue.  Something of the sort is true even within the Church community. Daily we see progressive churches push world values – socialism, abortion, same-sex marriage, mysticism, earth worship, pedophilia, transgenderism, etc. as part of God’s plan.

Not too many years ago, the Supreme Court authoritatively told us that “at the heart of liberty“ and thus the American constitutional order, “is the right to define one’s own concept of existence, of meaning, of the universe, and of the mystery of human life.” The liberation of thought from objective reality has thus been declared basic to what we are as a nation. Taken seriously this concept would mean utter chaos – Look no further than the evening news.

Wesley Pruden, in an article for the Washington Times, reminds us that Bonnie and Clyde sometimes called themselves “bank inspectors,” but they were only kidding.  The Palestinian Authority, the famous terrorist collective pretending to be a nation, collects millions from the U.S. Treasury every year to pay “salaries” to imprisoned terrorists, to make love offerings to families of dead terrorists, to celebrate terrorists as heroes, and build monuments to dead criminals.  And that’s no joke.

A few some-what prominent left-wing members of Congress want to organize vigilantes to follow Republicans into their homes, shops, churches, and restaurants to harass, intimidate and harangue them simply because they don’t hate Trump. Elizabeth Warren, the erratic Democratic senator from Massachusetts and former presidential candidate, claims that it’s the president of the United States who “is taking America to a dark and ugly place.”  Sorry Pocahontas – you’re too late.

“Vacations from reality, like stock market bubbles, can go farther and last longer than seems possible to those who recognize them for what they are. The obvious outcome of present tendencies would be a radically fragmented society ruled by a weak, corrupt, and abusive government.” James Kalb

Source: Against Better Worldism, Austin Frank. Today In Politics; The World Has Little of Value to Teach the Church by James Kalb, Crisis Magazine; Barking Mad and Proud Of It, by Wesley Pruden, Washington Time