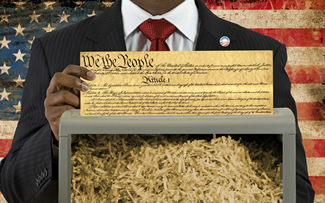 For the first 125 years of history, America operated under the individualist ideology of laissez-faire capitalism with the principles of private property, equal rights under the law, and individual sovereignty, predominant throughout her culture.

Today, most of the world operates under the collectivist ideology of authoritarian statism, labeled by terms  such as socialism, social welfare, corporatism, liberalism, etc. The collectivist ideology’s undergirding principles are public property, corporate-state collusion, and equal results in life predominant throughout their cultures.

Nelson Hultberg writes that modern intellectuals are anti-ideology. It’s not difficult to understand why our liberal dominated intellectual establishment opposes ideology since they were indoctrinated from the time they enter college that in this new modern world we must be flexible, pragmatic, willing to tolerate a new and ever-changing role for government – open to progressive experimentation and creative government – the Constitution is a living document – the use of a rigid set of political principles is impractical and reactionary.

The statist mind demands a vague and loosely defined government, unfettered by the restrictions of theory or principle or rights or labels or moral judgment.  They want blanket power over men and their production. Thus,  it is natural to be antagonistic toward the use of an overall ideology that labels their approach as dictatorial, statist, neo-facist, or authoritarian.

But labeling  things is important!  If you can’t identify things, you can’t possibly know what is happening around you.  Labeling is defining and defining is the establishment of distinctions, and distinctions show one what is right and what is wrong, beautiful or ugly, weak or strong, etc.

Today’s anti-ideology thinkers are advocating the initial stages of a dictatorship.  Do they really believe that by refusing to label it as what it is it somehow means it is not what it is?  Hiding from the reality of one’s convictions and advocacies will not change their nature.  Evil evaded is still evil.

What is needed is not to abandon the use of ideology in the structuring of society, but to devise a rational ideology based upon right principles which are crucial theoretical guides for men’s actions.  Without them and their concomitant of labels, we would be nothing but a nomadic assortment of sub humans with no rules or laws or theories or ideals to direct us.

No society in the history of man has ever existed, or ever will,  without the use of some form of ideology and its building blocks of terms (labels).  Our founding fathers were ideologues that posited a rational idealism in government affairs, leading to the Declaration of Independence and its enshrinement of the “rights of mankind.”

Ideology is theory, theory is thinking, and labels are our tools to construct proper theory.  The man who wants to erect a government and oversee society without thinking and labeling is a thug or a fool, or both.

The collectivist ideology, along with its welfarist variants, has ruled the world since the early twentieth century and its brutal irrationality is directly responsible for the tyranny that prevails over three-quarters of the globe.  It is time to restore the only rational ideology that exists – laissez-faire capitalism.  Socialists and liberals have had their chance and they failed.

Modern day tyrants want a vague pragmatism that is not defined (labeled) as to what it is.  In this way, they can violate our rights and say that they are only implementing necessary policy for the emergency of the movement, or the good of the group, or to serve the will of the people.  They can seek arbitrary, unfettered power and feel justified in doing so.

← The American Revolution is Finished – Or is it?
How Intensely Does the Leftwing Media Hate Trump? →