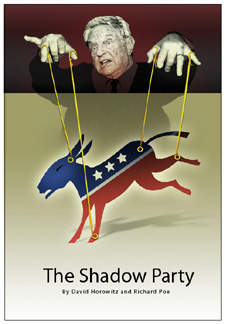 July 17, 2003, was the  death toll of the Democrat party and the birth of the new Shadow Party.

Shortly thereafter, Soros gave John Podesta $3 million to form the Center for American Progress, a “think tank” to act as the “brain trust” of the numerous institutions that would comprise the Shadow Party.   Lewis and Soros also cut a deal with Wes Boyd, founder of MoveOn.org, one of the many left-wing organization attached to the Shadow party, to match up to $5 million of any “new” money Boyd brought into his organization to be used for expansion.

In addition to MoveOn.org, other core groups that comprise the new party included Media Matters, America Votes, Thunder Road Group, Media Fund, and America Coming Together, each with its own mission to destroy George Bush.

Thanks to the McCain-Feingold campaign finance reform law, the Shadow Party became an alternative source of funding for the DNC putting the Alliance in control and Soros into position to define the DNC’s political agenda and to purge the party of any remaining moderates.

After Bush won re-election, Soros invited 70 carefully vetted, like-minded wealthy activists to restage his attack against Conservatives. Out of this meeting the Democracy Alliance (DA) was formed. “Partners” to the DA are on an invitation only basis with an initial joining fee, yearly dues and a requirement to donate at least $200,000 a year to groups the Alliance endorsed such as ACORN, Air America, Center for American Progress, MoveOn.Org, Media Matters, etc.

While members of the Alliance are secret, the Capital Research Center managed to compile the names of some of the more significant “partners,” most having ties to Soros that extended far beyond the DA.  Among those was Peter Lewis of Progressive Insurance, Rob Glaser and Rob McKay, both early backers of the Shadow Party, Tim Gill, a major funder of gay-rights groups,  TV producer Norman Lear,  Drummond Pike, founder of the Tides Foundation, and Simon Rosenberg, founder of the New Democrat Network.

With all this new money in play, Soros designed the Progressive Legislative Action Network, aka PLAN, to furnish state legislatures prewritten “model” legislation that reflected the left’s agenda.  Democracy Alliance launched the Secretary of State Project (SoSP) devoted to helping Democrats take office in swing states.  The Secretary of State position serves as the chief election officer to certify candidates, election results, and at times, helps determine the winner of a close election.

Remember the 2008 Senate election between Norm Coleman who finished the race 725 votes ahead of Al Franken?   The narrow margin of votes triggered a recount with Mark Ritchie presiding.  Richie, a former community organizer with ties to ACORN and the now defunct radical New Party,  was the recipient of SoSP’s help in winning his election as Secretary of State and, of course, depending on who you ask, Franken won or stole the election with Richie’s help.

In 2008, The Shadow Party, with its members contributing $58 million directly to the Obama campaign, succeeded in putting their man in office and installing members of Soros’ coalition in high level government jobs – members such as Van Jones, Carol Browner, Anna Burger, Kevin Jennings and Valerie Jarrett to name but a few.

After Trump defeated Hillary,  Soros and his cronies once again changed their tactics with the ultimate goal of destroying Trump and America as we know it. In addition to buying Congressional seats, the Alliance decided it was time to “overhaul” the Justice system through local races.  The Commonwealth Attorney and District Attorney are after all the first local and state lines of defense of the Constitution and the rule of law.

Democracy Alliance (DA) has also shifted their “charitable” giving out of D.C. and into mostly unknown groups in communities throughout the U.S. to further the left’s under-the-radar approach.

Soros recently announced an “infusion” of $1 billion into OSI to fund schools around the world to “educate” the next generation in the evils of sovereignty – to further indoctrinate our children in how to become a good obedient citizen of the world.

source:  From Shadow Party to Shadow Government by David Horowitz and John Perazzo; George Soros, 89, is Still on a Quest to Destroy America, by Cheryl Chumley, Washington Times;  The Curious Activity of George Soros in Virginia by Daniel Bobinski

← Racist, Rioter or Protestor – Your Sin is your Own, Not Mine
“Defund the Police”? The Method to the Left’s Madness →