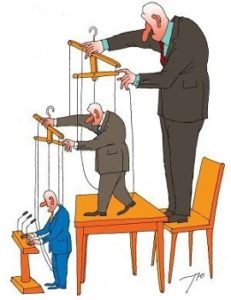 As a point in reality, the birth of communist Russia, was directly funded by Western bankers and supported with arms and military aid from the U.S. government.  It is the sort of information that leftist professors and the world’s global elite prefer you not know.  Global bankers are playing both sides of the economic war.

Mikhail Gorbachev, largely credited with the ultimate dismantling of the Soviet Union and the rise of the “new” Russia, has long been a proponent of the so-called “New World Order” and global government.  In an address, “Perspectives On Global Change” given at Lafayette College in Pennsylvania, Gorbachev argued that such a solution was necessary to safeguard [the left’s version of] freedom.  “…in the next 20 to 30 years, we are going to end up with world government….it’s inevitable. It will happen and become normal…..”   Is that really possible?

Don’t let the rhetoric fool you.  There is no fundamental political or philosophical conflict between the power brokers of the East and the West. Russia, just like the US,  is beholden to globalist financiers through organizations like the International Monetary Fund (IMF) and the Bank for International Settlements.  Russia’s  “economic” advisor since 2013 is none other than Goldman Sachs who also has a very close relationship with the Ukrainian government.  And Putin, well he’s never let those “evil Western robber barons”  stop him from borrowing billions every year from Western Banks.

Putin meets with Mr. World Order himself – Henry Kissinger –  on a pretty regular basis because they are “old friends.”  But this old friend became an even closer friend when Putin took office in 2000.  Being held in high esteem in Putin’s reign got Kissinger an honorary doctorate in diplomacy and a job as the head of a bilateral “working group” dealing with foreign policy, along with former KGB head and globalist General Yevgeny Primakov.

Clearly Putin is just another puppet pieces on the globalist chessboard, pitted against other puppets in the West in a grand theater designed to distract and divide the masses through chaos. As Kissinger points out – in crisis there is opportunity.

Abigniew K. Brzezinski, Obama’s 2008 foreign policy campaign advisor, and close friend is also friends with Henry Kissinger,  although unlike Kissinger he hates Russia, the country and the people.   As an advisor to five presidents, Council on Foreign Relations and Trilateral Commission member, Brzezinski argued in his book, The Grand Chessboard, for the defeat of Russia as a prerequisite to a standalone global American empire to reign over the entire planet.

In his book Between Two Ages: America’s Role in the Technetronic Era, Brzezinski elaborated on the ideology of a One World Government, writing that it would be impossible to leap into a world government in one quick step, that nation-states would gradually yield their sovereignty, and that more intensive efforts would be needed to shape a new world monetary structure.  “National sovereignty is no longer a viable concept…Marxism represents a further vital and creative state in the maturing of man’s universal vision.  Marxism is simultaneously a victory of the external, active man over the inner, passive man and a victory of reason over belief….”

The world’s elitist want complete political homogenization and the end to sovereignty. They want a global currency with centralized economic control which is but a short hop to world government.  That’s why you hear heads of state from around the world and international bankers calling for the IMF to take charge of the global economic system through its Special Drawing Rights currency program. But that presents one irritating little problem for the elitist.  In order  for the SDR to become a dominant currency, the dollar must lose its world reserve status and totally collapse.

This destruction of the dollar and institution of a global economic bureaucracy is not something that can be executed openly by international financiers. It must coincide with an extreme catastrophe event, likely worse than the Great Depression where millions upon millions of people will lose the ability to financially support themselves and their families, such as what we are currently experiencing through COVID-19.

The plan is to use scapegoats and false enemies  to draw our attention away from the real culprits – international bankers.  Make no mistake, this fight is not about about left-wing or right-wing politics or even our Federal Reserve.  These are just tools.  Don’t be fooled by the global stage play.  There are only two sides in this battle:  the elitist establishment and those smart enough to recognize their position.

Which side are  you on?

According to Carroll Quigley, CFR member, elitist insider and mentor to Bill Clinton, in his book Tragedy and Hope, “the powers of financial capitalism had a far-reaching aim….to create a world system of financial control in private hands able to dominate the political system of each country and the economy of the world as a whole. This system was to be controlled in a feudalist fashion by central banks of the world acting in concert, by secret agreements….The apex….was to be the Bank for International Settlement in Basel, Switzerland, a private bank owned and controlled by the world’s central banks which were themselves private corporations. Each bank….sought to dominate its government by its ability to control Treasury loans, to manipulate foreign exchanges, to influence the level of economic activity in the country, and to influence cooperative politicians by subsequent economic rewards in the business world.”

← Disguised in a Cloak of Christianity
Since When Did Bill and Melinda Gates Become Licensed Doctors? Gates Paying for Desired Outcome -This Is Illegal! →