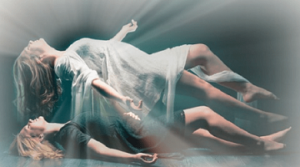 Is there life after death? Is it possible to even know if there is anything beyond the grave? Most scientists would probably say that the concept of an afterlife is either nonsense, or at the very least unprovable. Yet one expert claims he has evidence to confirm an existence beyond the grave – and it lies in quantum physics.

Professor Robert Lanza of the Wake Forest University School of Medicine in North Carolina, in his book Biocentrism: How Life and Consciousness Are The Keys To Understanding the True Nature of The Universe, writes that the theory of biocentrism [the Theory of Everything] proves death is but an illusion; that life created the universe, not the other way round, meaning that space and time don’t exist in the linear fashion we think it does. So, if space and time aren’t linear, then death can’t exist in ‘any real sense’ either. Humans believe in death because ‘we’ve been taught we die’, or more specifically, our consciousness associates life with bodies and we know that bodies die. Life is an adventure that transcends our ordinary linear way of thinking. When we die our life becomes a ‘perennial flower that returns to bloom in the multiverse.  What?

Most scientists are more down to earth when it comes to the question of life after death. Dr. Sam Parnia, a research fellow formerly at Southampton University, led a team of researchers in a 4 year study of near-death and out-of-body experiences, on more than 2,000 people who suffered cardiac arrests at 15 different hospitals in the UK, US and Austria.  What they found was that nearly 40% of those who survived described some kind of “awareness” during the time they were clinically dead, before their hearts were restarted. One patient recalled leaving his body and watching his resuscitation despite being “dead” for three minutes. Dr. Parnia said that despite the fact that the brain shuts down within 20 to 30 seconds after the heart stops, the patient could not only recount the actions of the nursing staff in detail but could describe the sound of the machines. “Everything that he said had happened to him actually had happened.”

Other patients experienced some kind of awareness even though they were unable to recall any specific details. One in five said they felt an unusual sense of peacefulness and nearly one third said time had slowed down or sped up. Some recalled seeing a bright light and others feelings of fear or drowning or being dragged through deep water. 13% reported the sensation of separation from their bodies and heightened senses.

Dr. Berthold Ackerman and a team of psychologists and doctors associated with the Technische Universidad of Berlin announced on November 27, 2017, that they had proven, by clinical experimentation, the existence of some form of life after death. Their announcement was based on conclusions of a study using a new type of medically supervised near-death experiences that allow patients to be clinically dead for almost 20 minutes before being brought back to life.

Over the last four years 944 volunteers, that included Christian, Muslims, Jews, Hindus and Atheists, were given a mixture of drugs that allowed the body to survive a state of clinical death and the reanimation process without damage. Regardless of religious beliefs, all subjects had, with slight variation, memories of their clinical death. Some described the feeling of detachment from their bodies, feelings of levitation, warmth, serenity, absolute dissolution, and the presence of overwhelming light.  I honestly have to ask, who in their right mind would volunteer to died for science?

Dr. Jeffrey Long, an oncologist, researcher and founder of the Near-Death Experience Research Foundation, in his book God and the Afterlife: Groundbreaking New Evidence of Near-Death Experience, describes the results from ‘The God Study’ in which he analyzed the near-death experiences of people from all types of backgrounds and initial beliefs who had claimed to actually have met God.

In God and the Afterlife, Dr. Long writes that near-death experiences cannot simply be discounted as dreams, hallucinations or the result of a dying brain because it is impossible for people who are unconscious, comatose or clinically dead to have “highly lucid experiences that are clear and logically organized.” Near death experiences are consistent across age, gender, ethnic, social and demographics and are always a consistent narrative.

While science will never be capable of proving beyond a shadow of a doubt that the afterlife exists, Christians don’t require scientific evidence.  “…God formed man from the dust of the ground and breathed into his nostrils the breath of life, and man became a living soul.” Gen. 2:9 The breath of life, or neshamah is the Hebrew word for spirit.

God created man as both a physical and spiritual being, that is with a spirit and soul. The human body is mortal, whereas the spirit and soul are immortal. The death of the body is a gateway into a fuller and larger life into which the spirit passes.