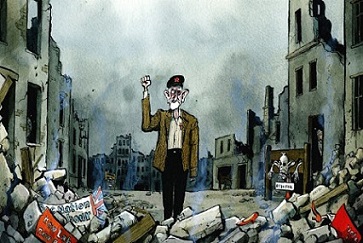 “There exists a subterranean world where pathological fantasies disguised as ideas are churned out by crooks and half-educated fanatics for the benefit of the ignorant and superstitious. There are times when this underworld emerges from the depths and suddenly fascinates, captures, and dominates multitudes of usually sane and responsible people.” Norman Cohn, Warrant for Genocide

From Karl Marx to today, the Left has always hated people on the Right.  The big question is: why? The standard explanation from the left – Turncoats are like prostitutes who sell their virtue for money. They are pure; those who disagree with them are corrupt; and that is all there is to it!

From its inception, leftism has been a secular Utopian religion. As Ted Kennedy, famously quoting his brother RFK, said: “Some see things as they are and say why? I dream things that never were and say why not?”   That exemplifies left wing idealism — imagining a Utopian future. There will be no poor, no war, no conflict, no inequality. That future is only a few more government programs away from reality. And who stands in the way of such perfection? Those Evil Conservatives!

Christopher Cook, in his article, The Top 3 Reasons Why Liberal’s hate Conservatives, writes that the left’s bottom line is the belief that if they tinker, coerce, intimidate and eventually rule, they can bring about that paradise on earth. They cannot see that this Utopian thinking quickly leads to an unavoidable conclusion, echoed from the French Revolution to Lenin and Stalin to Mao to the Progressives of the modern era: “On ne fait pas d’omelet sans casser des oeufs.” You can’t make an omelet without breaking some eggs. To the Utopian statist, “process costs” are entirely acceptable which explains why they are so tolerant of the corruption and craziness within their ranks.

With nothing to offer but stale, left-overs euphemisms from past history, the left resorts to Alinsky’s Rules for Radicals to subdue the opposition.  “Pick the target, freeze it, personalize it, and polarize it.”   And they have learned their lessons well  – rioting, lying to the public, calling for violence against the enemy which is usually any sane thinking person on the earth.

It is as James Lewis wrote in Infantile Rage on the Left, “In this season of despair…They are showing us a bunch of primitive, infantile defenses, telling us everything we need to know about them. Children easily retreat into fantasies but over time, as they grow, these fantasies should disappear but when they don’t – well, there is a word for adults with infantile defenses – neurotic.

Talk to a left-winger – it doesn’t take long for you to realize they don’t get adulthood.  Responsibility and reality are what they are forever trying to escape. Hatred of conservatives is so much part of the left that the day they stop hating conservatives will mark the beginning of the end of the left as we know it.

Since liberals tend to support or oppose policies based on how those policies make them feel about themselves, they do very little intellectual examination of whether the policies they advocate work or not. That’s because it doesn’t matter to them whether the policy is effective or not; it matters whether advocating the policy makes them feel “good” or “bad,” “compassionate” or “stingy,” “nice” or “mean.”   John Hawkins