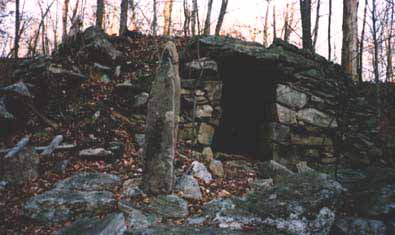 For generations the archeological world has been beset by the notion that only the navigational techniques introduced in Europe in the fifteenth century made it possible for Europeans to cross the Atlantic.  Yet, there is much more to America’s past than we’ve been taught.

There is an ever swelling number of puzzling ancient inscriptions, from nearly all parts of the United States, Canada and Latin America, written in various European and Mediterranean languages in alphabets that date from 2,500 years ago, that speak not only of visits by ancient ships but also of permanent colonies of Celts, Basques, Libyans, Hebrews,  and even Egyptians.

In 1975, in the course of an archeological survey of New Hampshire and Vermont, numerous inscriptions among ancient ruins prove the vitality of a Celtic civilization and tells a wonderful story of how European traders lived during the Bronze and Iron Age.

About 3,000 years ago bands of roving Celtic mariners crossed the North Atlantic to discover and colonize North America.  They came from Spain and Portugal, by way of the Canary Islands, sailing the trade winds as Columbus did long after them, most settling on the rocky coasts and mountains of New England to establish a new European kingdom they called Iragualon,  “Land Beyond the Sunset.”

First settling near the mouths of rivers of New England, at some point they ascended the Connecticut River sailing as far north as Quechee, Vermont, where a western branch of the river joins the main stream through a precipitous gorge.  From there they turned westward and colonized the hanging valleys of the Green Mountain.

In these secluded valleys and hills Druid priests erected temples and circles of standing stones using great stone boulders left by the retreating glaciers at the end of the ice age  and buried their dead in marked graves.   On these stones they cut their inscriptions, using the ancient Celtic alphabet called Ogam.  They were still there in the time of Julius Caesar as is attested by an inscribed monolith on which the date of celebration of the great Celtic festival of Beltane (May Day) is given in Roman numerals appropriate to the reformed Julian calendar introduced in 46 B.C.

Quechee, incidentally, perpetuates the ancient Gaulish pronunciation of the Celtic word quithe, meaning chasm or pit and the river that flows through the gorge, the Ottaquechee, similarly is an Amerindian rendering of the Celtic name meaning Waters-of-the-Chasm.

They were followed by the Phoenician traders of Spain, men from Cadiz who spoke the Punic tongue, writing in what we call the Iberian script.  While some of the traders only temporarily settled along the coast leaving a few engraved stones to mark their visits or record their territorial claim, others settled permanently  where they, together with Egyptian miners, became part of the Wabanaki tribe of New England.

Further south, Basque sailors came to Pennsylvania and established a temporary settlement leaving grave markers bearing their names.  Still further south, Libyan and Egyptian mariners entered the Mississippi from the Gulf of Mexico, traveling inland to Iowa and the Dakotas and westward along the Arkansas and Cimarron Rivers to leave behind inscribed records of their presence.

European voyages who ascended the Mississippi turned west to follow the Arkansas River, eventually reaching the Cimarron along the border between Oklahoma and Colorado.  Discoveries show that some Celts had also followed this southern route and that Libyans and Punic speaking Iberians, and even one Basque king had ventured into the heartland of the continent centuries before Christ.

Norse and Basque visitors reached the Gulf of St. Lawrence, introducing various mariners’ terms in the language of the northern Algonquian Indians.  Descendants of these visitors also can be found among the Amerindian tribes, several of which use dialects derived in part from the ancient tongues of Phoenicia and North Africa.

The old Copper Culture of north Michigan and Lake Superior regions have been carbon dated to circa 2000 BC, along with some 5,000 copper mines in operation on and near the Copper Peninsula.

In 1700 BC Nordic navigator/traders arrived in Ontario from Scandinavia, bringing woven textiles as barter for Canadian copper which they shipped back to Scandinavia.  At the Peterborough site in Ontario they left a pictorial record, annotated in Tifinag script, an early Norse language, reporting their religious, astronomical, calendric and trading interests, in their contacts with the Algonquian Indians.  Ogam and Celtic elements are also present.

In 300-100 BC traders from Carthage visited North America and the Caribbean, bringing coinage of Punic Sicily and North Africa, and bronze coins of other Mediterranean states, along with the work of Greek artists.

Celtiberian and Ogam inscriptions on bone and stone artifacts were buried with skeletons of both Amerind and Europoid types at sites in eastern Tennessee, radio-carbon-dated to 250 BC.  A Hebrew inscribed stone found at Bat Creek, Tennessee, buried with  nine skeletons and wooden artifacts was carbon-dated to 225-625 AD. The skeletons at this site showed the great diversity of settlers representing ancient people from the Oriental regions that are still present in the mountains of Malaya and the Philippines.  Many resemble European and Mediterranean races that settled among the Indians.   Ancient Hebrew coins were also found at other sites in southeastern states.

In 500 AD Christian Celtic traders and monks from Ireland and Hebridean islands reach North America and left Ogam religious and other texts cut in rock faces and cases, in various states, but most notable in West Virginia.

Truth becomes hidden when people fail to diligently seek after it.