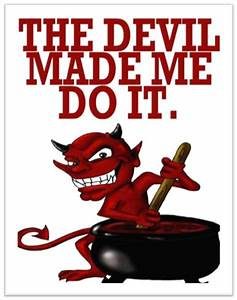 “Let no may say when he is tempted, I am tempted of God: for God cannot be tempted with evil, neither tempteth He any man.  But every man is tempted when he is drawn away of his own lust and enticed.” James 1:13-14

CNN reports that when a Chilean man identified himself to Pope Francis, the pope reportedly told him being gay didn’t matter because “God made you like this, God loves you like this, the Pope loves you like this and you should love yourself and not worry about what people say.”  Now, whether or not that was an accurate representation of what Pope Francis said is up for debate.  What we do know for certain is that God loves His children, sinners included, but that does not mean He condones sin.

Some will argue that in Isaiah 45:7 God admitted to creating evil, what some call sin,  but that is only from a mistranslation of the Hebrew word rah which actually means adversity, affliction, calamity, or misery.  Rah is from the prime word raa, to be good for nothing.  Rather than saying God created “moral evil,” Isaiah is presenting a common theme of Scripture – that God brings disaster or calamity on those who continue in rebellion against Him, not that it is okay to blame God for one’s own sins.

Let’s be honest, life would be much less complicated if we weren’t held accountable for our own choices or if God would prevent us from making bad choices.  However,  God did not create a robotic creature that walks around spouting: Love You God, Love You God all day long.  He wants His children to make their own choice to follow Him.  True love is, after all, a two-way street – it is not genuine if there’s no other option.

Genesis tells us that God created man in His own image.  The Hebrew word tselem,  translated image, means a resemblance or a representative figure.  And while God created man and woman with different physical characteristics, both were created with the ability and responsibility to manage and have authority over their own lives.  Mankind was given freedom of choice, the ability to make his or her own choices in how they live their lives.  To assist us in making the right decisions, God gave us commandments, rules, regulations, as any parent would have their children follow.  He gave us prophets or teachers if you will, to help us make the right choices in life but if we choose to ignore His help,  that is a reflection on us, not God.

While we are constantly bombarded with messages from the left about our right to choose, whether it’s homosexuality, same sex marriage, the murder of innocent unborn babies, adultery, fornication  etc. they neglect to balance that message with the consequences that those choices bring.  Paul in his Epistle to the Galatians in 6:7 writes: “Be not deceived; God is not mocked: for whatsoever a man soweth, that shall he also reap.  For he that soweth to his flesh shall of the flesh reap corruption; but he that soweth to the Spirit shall of the Spirit reap life everlasting.”  Good choices bring about good results; bad choices eventually result in unpleasant or disastrous outcomes.

“Let not sin therefore reign in your mortal body, that ye should obey it in the lusts thereof. Neither yield ye your members as instruments of unrighteousness unto sin: but yield yourselves unto God, as those that are alive from the dead, and your members as instruments of righteousness unto God. For sin shall not have dominion over you: for ye are not under the law, but under grace. What then? shall we sin, because we are not under the law, but under grace? God forbid. Know ye not, that to whom ye yield yourselves servants to obey, his servants ye are to whom ye obey; whether of sin unto death, or of obedience unto righteousness?”  Romans 6:12-16

The commands of the Old Testament were attached to blessings for obedience and penalties for disobedience; in other words, the Law emphasized the responsibility of individuals to respond in morally appropriate ways to God’s revealed truth. God clearly defined right and wrong, and His people were expected to do what was right.

To paraphrase Kenneth Boa in his article Divine Sovereignty vs. Human Responsibility, the Bible makes it clear that we are not pawns in the hands of a deterministic and fatalistic universe. Every command given of God is proof of the reality of human responsibility.

“Evil spreads in the darkness where the light of truth and justice does not shine.  When evil is ignored, or worse, forgotten, its power is able to grow; the greater the evil the greater the harm it will cause.”  Henry Karlson

Sources: Chilean Abuse Victim: Pope Told Me To Accept Being Gay, by the Catholic News Agency;   Choices Create Our Future, by Betty Miller; and  Free Will, What is It?  By by Don Henson