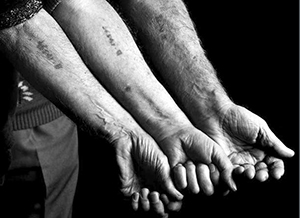 But Hitler has nothing on the left who have spent the last 50 years dehumanizing unborn children as mere blobs of cells, parasites totally devoid of the right to life. They have succeeded in convincing women to murder 1.72 billion (and counting) children, not only destroying their lives but the future of their nation.  An unborn child is not an object – it is a human being!

Today, unfortunately, there is a growing tendency to politicalize and dehumanize anyone who holds beliefs different from the flavor of the day. Former speechwriter Michael Gerson once wrote that “the rival crew, it turns out, is not only wrong but evil. And how can mortal enemies embrace the give and take of a shared political project? Only the raw exercise of power can decide between them. The goal is no longer to win arguments but to crush opposition.”

Once certain groups are stigmatized as evil, morally inferior, and not fully human, the persecution of those groups becomes more psychologically acceptable.

Restraints against aggression and violence begin to disappear. Not surprisingly, dehumanization increases the likelihood of violence and once the conflict has escalated, it may seem even more acceptable for people to do things that they would have regarded as morally unthinkable before.

In a Vanderbilt University study, people were asked to rank members of their own political party and the opposing party on an evolutionary scale represented by modern humans on one side and apelike creatures on the other. According to the study, “77% of respondents rated their political opponents as less evolved than members of their own party. Respondents who considered themselves strong partisans were more likely to dehumanize opposing partisans, and Republicans and Democrats were equally likely to dehumanize their opponents.”

Some of America’s politicians, commentators and other leaders, especially those on the left, now genuinely believe their opponents to be inherently evil. Some openly encourage the verbal and physical abuse of opponents.  Congresswoman Maxine Waters, for example, routinely urges supporters to confront Trump’s supporters and tell them “they’re not welcome anymore, anywhere.

America’s most influential actors and artists routinely deploy the language of hatred and violence toward Trump and his followers. Turn on the television on any given night and there’s a good chance you’ll see Bill Maher, Jimmy Kimmel and others demonizing  those on the right.  These men don’t merely despise Trump’s policies or ideologies, or even his appearance or mannerisms—very often it’s evident that they openly despise Trump’s very existence.

If such a spirit of hatred remains unchecked, and if you believe your enemy is an animal, it’s easier to treat him like an animal. The forces behind the tendency to dehumanize the enemy are now overpowering; the spirit of competition and hatred has become so strong as to make some capable of committing extreme acts of violence.

You can see this terrifying future not only in the demonization of  Trump or his supports, but in the animosity against any form of patriotism, in the vitriolic accusations America’s leaders routinely levy on one another and on segments of American society, and in the sadistic, violence-inducing, nation-destroying remarks regularly made by media personalities, music moguls, Hollywood stars and far-left politicians.

Source: The Consequences of Dehumanizing Your Neighbor, By Brad Macdonald; Dehumanization by Michelle Maiese;  Pro-Abortion Speech: The Deception Of Dehumanizing The Preborn by Petra Wallenmeyer

← Depraved Dining Anyone?
Marxism and the Protestant Church →