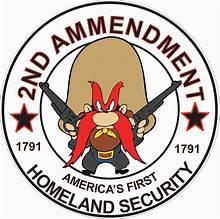 “Most gun control arguments miss the point. If all control boils fundamentally to force, how can one resist aggression without equal force? How can a truly “free” state exist if the individual citizen is enslaved to the forceful will of individual or organized aggressors? It cannot.” Tiffany Madison

The craziness you see around you has but one goal – to destroy this country. The only thing that actually keeps them from going bat ass crazy is the Second Amendment.

FBI stats show that the NICS processes 2.5 million background checks per month.  From 1998 when it became law, to February 2021, the NICS had processed 380,459,962 background checks. So how many guns are in circulation? No one is actually sure since no one knows how many were owned prior to 1998. My guess, give or take a million here or there, is around 900 million. To put that into perspective, in 2011 there were 2.3 million serving in the military, including the National Guard and Reserve units.

The Second Amendment is not about hunting, or even just defense of your own home. It was written by men who ultimately believed that governments and armies would turn on their own people. History has proven them to be correct. Countries like the Soviet Union, Nazi Germany, Cuba, and present-day Venezuela have witnessed how gun control has given their respective governments a significant advantage in dishing out violence.

In recent decades states have acted in many cases to expand rights to gun ownership but there is no guarantee that this will continue. If the left-wing socialist gun control crowd take control of the government things could change quickly.

At first glance, gun confiscation doesn’t seem to be feasible. With an estimated 900 million guns in circulation, mass confiscation is a tall order. It also helps that the United States’ federalist system fosters a strong degree of institutional competition between states which puts pressure on politicians to not infringe on gun rights lest they lose out to states that foster gun rights.

In addition, cultural factors behind gun ownership are heavily ingrained in the civic and cultural DNA of Americans. From hunting associations to grassroots lobbies, Americans have developed powerful civic institutions that are ready to confront the state should politicians try to transgress on their rights.

Gun control advocates realize this and rather than attempt to repeal the Second Amendment, which requires a two-thirds majority in both chambers of congress and having three quarters of the states ratify such an amendment, they are working behind the scenes to circumvent the Constitution. by working through state courts and ultimately the Supreme Court, hoping to have the 2nd amendment reinterpreted in such a manner that disregards what our founders intended.

The Supreme Court has a long history of reinterpreting the Constitution as a way of justifying government overreach in matters traditionally belonging to the states. This has been the case with the Supreme Court’s acceptance of New Deal legislation and its creation of a federal “right” to abortion. That is why it is so important to have Conservative representation on Court.

It does not help that the Second Amendment’s original decentralized militia model has already been gutted, thus exposing several chinks in the Second Amendment’s armor. The militia’s original concept—locally-controlled military units designed to keep federal standing armies in check—has been effectively neutered. And even though private gun owners outnumber and outgun the standing military, the castration of militia units gives the state a disproportionate advantage in its ability to carry out tyrannical acts such as gun confiscation to “quell” potential unrest which the left is pushing so hard to create

Last but not least, the power of ever-growing bureaucracies cannot be overstated. James Bovard raises excellent points in an article titled “Should Gun Owners Fear the Deep State?,” which, according to Bovard, “refers to the officials who secretly wield power permanently in D.C., often in federal agencies with vast sway and little accountability.

The FBI is the agency in charge of federal background checks for firearms. The National Instant Criminal Background Check System (NICS) is the bedrock of federal gun control, and has remained in place for two decades despite evidence pointing to its ineffectiveness in stopping crime.

We must never let down our guard. While we can vote anti-gun politicians out of office, we face an almost impossible challenge in holding bureaucracies accountable.

“The rifle itself has no moral stature, since it has no will of its own. Naturally, it may be used by evil men for evil purposes, but there are more good men than evil, and while the latter cannot be persuaded to the path of righteousness by propaganda, they can certainly be corrected by good men with rifles.” Jeff Cooper, Art of the Rifle