Mankind tends to operate on emoti 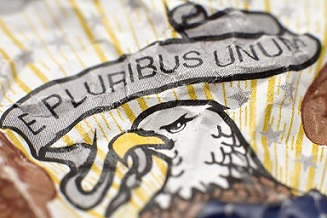 on more than reason which helps explain why government can so easily coerce us into accepting the illegal immigrants streaming across our border, often filled with a sense of entitlement.

Why are we not filled with righteous anger?  Should we not be motivated to robustly defend the homeland?  A few are but a large percentage of Americans work against the common good and the rest, well, they are comfortably numb to the destruction all around them.

This truth was once recognized and emphasized by our founders who mentioned that America enjoyed the benefit of “consanguinity,” meaning, a relationship based on having the same remote ancestors.

This became less of a reality after waves of 19th century immigration, yet emphasis was still placed on maintaining nationhood. Was it not President Teddy Roosevelt who said in 1907 that “treating people with equality was not a given” but was, in fact, “predicated  upon the person’s becoming, in every facet, an American, and nothing but an American?”  He went on to say, “Any man who says he is an American, but something else also, isn’t an American at all.”

Nationhood was defended legislatively in 1921 with the Emergency Quota Act and in 1924 with the enactment of the National Origins Act, both of which used immigration quotas to maintain our country’s demographic balance.  Today some call this racist.  But demographic upheaval is precisely how you destroy a nation.  Ask the Tibetans, American Indians or the Ainu of Japan.

Demographic upheaval is what Democrats had in mind when they introduced The Immigration and Nationality Act of 1965. This bill increased immigration levels from a historical annual norm of around 250,000 to more than one million a year while limiting immigration from the Western Hemisphere.

Not only did the rate of immigration exceed the rate of assimilation, but assimilation into the nation was no longer stressed.  Couple this with the rise of multiculturalism, and worse, moral relativism, where people are basically told it’s all perspective; whatever works for you unless it happens to be authentic Americanism. Is it any surprise that we’ve become a multitude of disparate people trying to coexist within the same porous borders?

We’re not divided – we’re fractured: religiously, philosophically, politically, socially, ideologically and culturally.  Our unofficial motto, once E Pluribus Unum, has become E Pluribus Plura — out of many, many more. This is why we fight over everything, from life’s origin to politics to football to baking cakes to marriage to, even, what boys and girls are. It’s why everything ends up in court.

As for the end game, people with badly conflicting values trying to co-exist under the same roof will eventually go their separate ways  unless, as with bickering children, an iron hand keeps them in line. The large groups of people known as countries are no different.

Unless something radically alters our cultural trajectory, as a nuclear blast might alter an asteroid’s, America’s fate will be either dissolution or despotism.

source:  The Decline and Fall of American Nationhood by Selwyn Duke