As reported by prisonplanet:

U.S. Senator Rand Paul gave a speech on the floor of the U.S. Senate during which he suggested that having “more than seven days of food” in your house could potentially get you branded as a “potential terrorist” by the federal government.

The following is part of Paul’s speech: 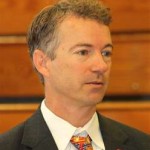 Know good and well that some day there could be a government in power that is shipping its citizens off for disagreements. There are laws on the books now that characterize who might be a terrorist.

Someone missing fingers on their hands is a suspect according to the Department of Justice. Someone who has guns, someone who has ammunition that is weatherproofed, someone who has more than seven days of food in their house can be considered a potential terrorist.

If you are suspected by these activities do you want the government to have the ability to send you to Guantanamo Bay for indefinite detention? video

Oath Keepers has posted a report about one incident in which federal agents actually visited a food production facility and demanded the names of anyone that has been “purchasing bulk food”. The following come from an article about this incident that was recently written by Rand Cardwell, the president of the Tennessee chapter of the Oath Keepers….

A fellow veteran contacted me concerning a new and disturbing development. He had been utilizing a Mormon cannery near his home to purchase bulk food supplies. The man that manages the facility related to him that federal agents had visited the facility and demanded a list of individuals that had been purchasing bulk food. The manager informed the agents that the facility kept no such records and that all transactions were conducted on a cash-and-carry basis. The agents pressed for any record of personal checks, credit card transactions, etc., but the manager could provide no such record. The agents appeared to become very agitated and after several minutes of questioning finally left with no information. I contacted the manager and personally confirmed this information.

* missing a hand or fingers

What do they suggest be done? Be completely nosy, ask questions and report you.

← How Do You Grow A Leg?
GM SEED: Opening Pandora’s Box →

4 comments for “You’ve Been Labeled A Potential Terrorist”