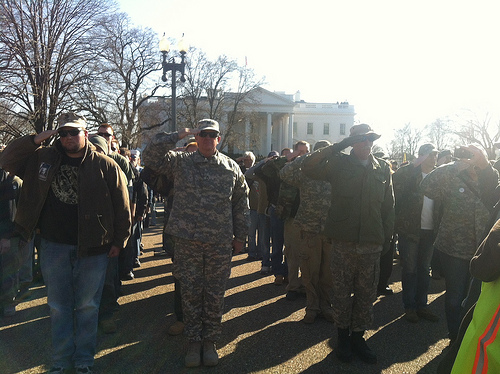 Feb. 20, 2012 – Meeting alongside the Washington Monument, more than 1,000 marched in a demonstration to the White House. With an about face, veterans and active duty service members turned their backs to the White House sending Obama the message: Ron Paul is the choice of the troops.

Adam Kokesh, founder of Veterans for Ron Paul 2012 and a veteran of the Iraq war said, “It seems very clear to me that those of us who are willing to put our lives on the line to defend this country want a commander in chief who is going to be decisive, who’s going to put America’s security interests first, and who’s only going to send us into harms way with a clear mission. Ron Paul is the only candidate that comes close to measuring up to that standard.”

Alex Schlegel, a Baltimore native and member of the Air Force, said, “I raised my right hand to defend the Constitution,” and he also agrees with Paul’s foreign policy ideals, as the U.S. hasn’t fought in a war constitutionally since World War II.

Grey Zachary from Knoxville, Tenn., was there with her husband in mind, as he’s been serving in Korea for two years. “I’m supporting the man that supports my man,” she said.

Zachary stated that it’s up to voters to bring about real change, from who they elect as representatives to who they elect as president, and her choice for president is Ron Paul. “To support any other candidate, I would lack integrity.”