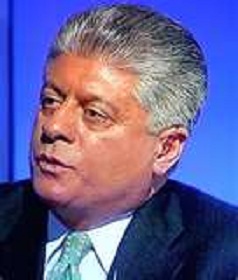 For the past few weeks, I have been writing in this column about the government’s use of drones and challenging their constitutionality on Fox News Channel where I work. I once asked on air what Thomas Jefferson would have done if–had drones existed at the time–King George III had sent drones to peer inside the bedroom windows of Monticello. I suspect that Jefferson and his household would have trained their muskets on the drones and taken them down. I offer this historical anachronism as a hypothetical only, not as one who is urging the use of violence against the government.

Nevertheless, what Jeffersonians are among us today? When drones take pictures of us on our private property and in our homes, and the government uses the photos as it wishes, what will we do about it? Jefferson understood that when the government assaults our privacy and dignity, it is the moral equivalent of violence against us. The folks who hear about this, who either laugh or groan, cannot find it humorous or boring that their every move will be monitored and photographed by the government.

Don’t believe me that this is coming? The photos that the drones will take may be retained and used or even distributed to others in the government so long as the “recipient is reasonably perceived to have a specific, lawful governmental function” in requiring them. And for the first time since the Civil War, the federal government will deploy military personnel inside the United States and publicly acknowledge that it is deploying them “to collect information about U.S. persons.”

It gets worse. If the military personnel see something of interest from a drone, they may apply to a military judge or “military commander” for permission to conduct a physical search of the private property that intrigues them. And, any “incidentally acquired information” can be retained or turned over to local law enforcement. What’s next? Prosecutions before military tribunals in the U.S.?

The quoted phrases above are extracted from a now-public 30-page memorandum issued by President Obama’s Secretary of the Air Force on April 23, 2012. The purpose of the memorandum is stated as “balancing…obtaining intelligence information…and protecting individual rights guaranteed by the U.S. Constitution…” Note the primacy of intelligence gathering over freedom protection, and note the peculiar use of the word “balancing.”

When liberty and safety clash, do we really expect the government to balance those values? Of course not. The government cannot be trusted to restrain itself in the face of individual choices to pursue happiness. That’s why we have a Constitution and a life-tenured judiciary: to protect the minority from the liberty-stealing impulses of the majority. And that’s why the Air Force memo has its priorities reversed — intelligence gathering first, protecting freedom second — and the mechanism of reconciling the two — balancing them — constitutionally incorrect.

Everyone who works for the government swears to uphold the Constitution. It was written to define and restrain the government. According to the Declaration of Independence, the government’s powers come from the consent of the governed. The government in America was not created by a powerful king reluctantly granting liberty to his subjects. It was created by free people willingly granting limited power to their government — and retaining that which they did not delegate.

The Declaration also defines our liberties as coming from our Creator, as integral to our humanity and as inseparable from us, unless we give them up by violating someone else’s liberties. Hence the Jeffersonian and constitutional beef with the word “balancing” when it comes to government power versus individual liberty.

The Judeo-Christian and constitutionally mandated relationship between government power and individual liberty is not balance. It is bias–a bias in favor of liberty. All presumptions should favor the natural rights of individuals, not the delegated and seized powers of the government. Individual liberty, not government power, is the default position because persons are immortal and created in God’s image, and governments are temporary and based on force.

Hence my outrage at the coming use of drones–some as small as golf balls–to watch us, to listen to us and to record us. Did you consent to the government having that power? Did you consent to the American military spying on Americans in America? I don’t know a single person who has, but I know only a few who are complaining.

If we remain silent when our popularly elected government violates the laws it has sworn to uphold and steals the freedoms we elected it to protect, we will have only ourselves to blame when Big Brother is everywhere. Somehow, I doubt my father’s generation fought the Nazis in World War II only to permit a totalitarian government to flourish here.

Is President Obama prepared to defend this? Is Gov. Romney prepared to challenge it? Are you prepared for its consequences?

← Obama’s Green Jobs: What’s In A Name!
Losing Your Constitutional Rights Under Obamacare →

2 comments for “Where’s The Rage? Are you prepared for its consequences?”