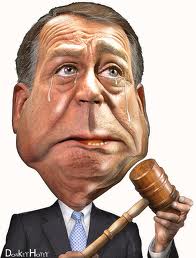 It is official – The majority of House Republicans officially went to the dark side.  Not only did they support  a “bailout” that increased taxes on middle America, capitulated twice to raising the debt limit and will more than likely approve the Sandy Scam porkus bill,  but they re-elected John Boehner as Speaker of the House.  They can no longer pretend to be conservatives.

“We’re sent here not to be something, but to do something,” Boehner said after he was re-elected speaker on the first day of the new Congress.  “Our government has built up too much debt. Our economy is not producing enough jobs. These are not separate problems,” the Republican from Ohio said. “At $16 trillion and rising, our national debt is draining free enterprise and weakening the ship of state.”

“That burden is ours and so is the opportunity,” he said. “We know it’s wrong to pass this debt on to our kids and grandkids. We have to be willing, truly willing, to make this right.”

After quoting from the Bible Boehner said  “When the day is over, and the verdict is read, may it be said that we well and faithfully did our duty to ensure freedom will endure and prevail.”

That is something coming from a man who has bowed and scraped to Obamanomics any time he had a chance.  Now we are to think he’s concerned about America’s future?    Where was all that concern when he brokered all those deals that  increase the national debt?

What we needed was a true leader to stand up t0 Obama’s excess spending and power grab.  What we got was another proven establishment puppet.