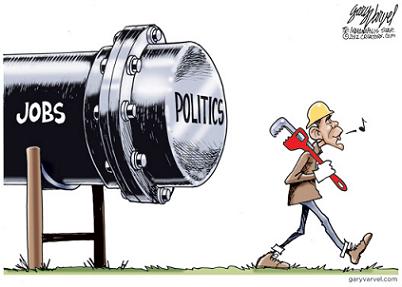 As is typical with the Obama administration, anything they wish to sneak by the public is usually released late on Friday.   This last Friday proved to be no different.

The U.S. State Department released its draft report on the proposed Keystone  pipeline.   It’s good news for America – bad news for Obama and all his environmental Nazis.

The report concluded that the pipeline will have little impact on the climate or the environment or  endangered species, but building it will create a jobs bonanza – with approximately 42,100 new jobs, creating around $2.05 billion in income for workers.   In addition, the pipeline will result in $3.1 billion in direct expenditures and an undetermined amount of revenue from sales and use taxes for the failing economy.

The report even gives the pipeline a passing grade in the politically correct category of “environmental justice” concluding that, “impacts to minority and low-income populations during construction may include exposure to construction dust and noise, disruption to traffic patterns, and increased competition for medical or health services in under served populations but, such  impacts would generally be small and short-term.”  In addition, as “the risk of a potential release is roughly equal at all points along the pipeline, the risks associated with such releases would not be disproportionately borne by minority or low-income populations.”

The environmental Nazis who see no problem with the slaughter of thousands of bald eagles and migratory birds in the wake of “green” wind terminators, are in a snit about the possibility of 42,100 people actually have good paying jobs and the economic gain for businesses and the economy.  How dare they release such a report!

The report is now entering a 45 day public comment period.  You can be sure, the environmental Nazis will see this as a necessary 45 day propaganda period to deny the facts, deny reality and do everything in their power to deny Americans and Canadians the many benefits that will flow through this pipeline.

So,  if you want to end dependency on oil from tyrants, want to see America and Canada prosper, want a clean environment without the propaganda and want to create a job for your unemployed neighbor at a great wage, speak up now!

Join the debate.   As part of the EIS process, members of the public, public agencies, and other interested parties are encouraged to submit comments, questions, and concerns about the project via e-mail to keystonecomments@state.gov, at http://www.keystonepipeline-xl.state.gov/, or by mail to: U.S. Department of State Attn: Genevieve Walker, NEPA Coordinator 2201 C Street NW Room 2726 Washington, D.C. 20520.

Even if the enviro Nazis, with Obama’s assistance,  block it again,  companies seeking to get Canada’s oil sands to U.S. and world markets could travel the old-fashioned way: by rail.   Canadian and U.S. railroad companies have been busy installing new track and loading facilities to carry the oil sands crude from northern Alberta to refineries in the United States and Canada.   Producers and refiners are scrambling to buy their own tank cars in order to lower the cost and increase the certainty of transport.

“Oil will get to market. This is clear,” Gary Doer,  Canada’s ambassador to the United States, said in an interview Friday. “Canadian oil and, for that matter, North Dakota and Montana oil is going to get to market,” he added, even if producers opt for rail.