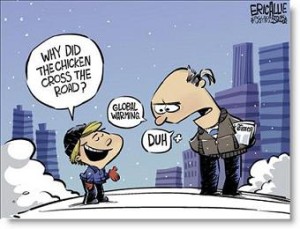 The Obamaites are circling the wagons to fight off those dreaded global warming skeptics while calling for a renewed war on warming and mayhem.

On top of his war against coal, Obama has ordered the EPA and the Department of Transportation to cut back on truck emissions by the end of his term and is calling for a new $200 million tax credit for companies to make  more of those “green vehicles” that no one really wants.

Just last week Obama joined his friends and contributors  in  California to highlight the state’s drought emergency, caused of course by global warming, calling for “shared sacrifices” to manage the state’s worst water shortage in decades.  And just to prove his concern, he spent the rest of the weekend enjoying the hospitality of some of the state’s top water hogs – desert golf courses.

There are about 124 golf courses in the Coachella Valley that consume about 17% of all the water there plus one-quarter of the water pumped out of the region’s at-risk groundwater aquifer.    On average, each golf course uses nearly 1 million gallons a day which is 3 to 4 times the water used at an average golf course.   Of course his royal personage couldn’t golf with just anyone – how would that look – so he chose to play at two of the most exclusive – Sunnylands and Ellisons, both closed to the lowly peasants.

Whilst his royal personage was  proving that the country should do what  he says and not what he actually does, his elitist Secretary of State John Kerry  was globe jetting  to convince the rest of the world that  his background in Political Science and his rich lifestyle makes him an expert on global warming, which he touted is just as  big a threat  to the world as terrorism and weapons of mass destruction.

In Indonesia, the world’s largest exporter of coal, Kerry was attempting to make the government and lowly peasants feel ashamed of their contribution to the world’s rising temperatures but his speech was interrupted by the eruption of Mount Kelud.    Talk about a weapon of mass destruction!

Kerry says controlling the weather [and Mt. Kelud] is as simple as instituting an energy policy that eliminates coal and oil [and keeps Indonesia poor]. Admitting that not all scientists agree that there is global warming, Kerry told the gathering that the world should not allow a “tiny” minority of shoddy scientists and extreme ideologues to compete with scientific facts.  Nor should we allow any room for those who think that the costs associated with doing the right thing outweigh the benefits.”

Flying first class is doing the right thing?  His trip from Washington to Seoul to Beijing to Jakarta to Abu Dhabi and back to D.C. ran up about 12.16 metric tons of carbon dioxide, ,according to CarbonFootprint.com.    In comparison, the  average American generates about 19 tons a year.

I guess the next step is for Obama to write an executive order  to force Boeing to build solar powered jets!

Meanwhile, back in the states,  far-left Senators Bernie Saunders and Brian Schatz are gathering signatures on a letter to ABC, CBS, NBC, and Fox that expresses their shock and disapproval  at the networks lack  of informing the viewers about global warming.   Why should MSNBC  be the only channel to make fools of themselves?   Saunders thinks this lack of pushing the global warming scam tells viewers that climate change is not important and irrelevant.   At least he got that part right.

But just the threat of a letter seems to have worked because all four networks held roundtables Sunday to discuss global warming.  NBC  assured us that global warming is actually happening, while Meet the Press made certain we all knew it was our fault.  Chris Wallace at Fox talked to Kimberley Strassel of the Wall Street Journal about the switch in catch phrases from global warming to climate change.   According to Strassel, it became climate change when they couldn’t prove there was much global warming anymore so the switch to a catch-all phrase like climate change made more sense.

Apparently all climate, all the time is now  Man’s fault.  When it gets really cold, or really hot, when we have hurricanes and tornados or not,  droughts, wildfires, storms, flooding,  any weather event,  Obama and his merry band of  job killers nor the United Nations  is  responsible for the loss of jobs, the economic downturn, and the rise in cost of everything we buy, eat or use   –  it’s all your fault.   That should make you feel better when you’re shivering in the cold because you can’t get oil or coal to heat your home?