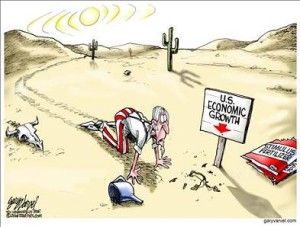 According to a 3 year study from the Brookings Institution, the American economy is less entrepreneurial now than at any point in the last three decades. Business dynamism is the process by which firms continually are born, fail, expand or contract, as some jobs are created, others are destroyed, and others still are turned over. This dynamic process is vital to productivity and sustained economic growth and entrepreneurs play a critical role in the process and in net job creation.

The study also noted that we actually hit a first – businesses were collapsing faster than they were being formed which explains why annual job growth rates have refused to budge above 2% for the duration of the so-called “recovery.”

State and metro data mirrored the national trends, dropping on average of 47.2%. The Brooking’s study didn’t mince words about the stakes involved – if the decline persists “it implies a continuation of slow growth for the indefinite future.”

The latest slight-of-hand unemployment figure of 6.3% released by the Bureau of Labor Statistics drastically understates the weakness of job opportunity by ignoring the existence of all those missing workers; those people who would be working or looking for work if job opportunities were significantly stronger, and those workers who have had to accept part-time jobs to try and make ends meet.

The “main” unemployment number that the government uses but doesn’t release to the public is U6 that actually includes not only those actively looking for jobs but the underemployed and the totally discouraged who finally gave up trying to find a job. In April U6 stood at 12.3%, a far cry from the 6.3% they want you to believe.

Even if you discount those who are underemployed, in April there were a total 6,220,000 missing workers no longer looking for employment, which would put the unemployment figure at 9.9%, again a far cry from the 6.3% they want you to believe.

20% of American families do not have a single person working. There are more than 60 million individuals receiving federal assistance, a number that exceeds the number of full-time workers in the private sector.

According to the employment-population ratio, the percentage of working age Americans that actually have a job has been below 59% for more than four years in a row.   And what is even more frightening is that more families are falling out of the middle class every day. A recent CNN article said that approximately one-third of all U.S. households are living hand-to-mouth, constantly on the edge of financial disaster.

If this is a recovery, I’m the queen of Sheba!

← Who’s Behind the New World Order?
First Flight of the AT Black Knight Transformer →