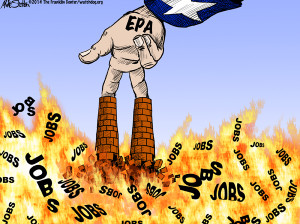 After Cap and Trade failed to attract even modest traction in Democratic controlled Congress, Obama said that “it was just one way to skin the cat.” Now we know that the cat he referenced was the American consumers as he finally made good on his promise to stomp the will of the people in his vendetta against American energy. And after six years of being hyper-regulated by the EPA, America’s energy infrastructure and consumers are ill-prepared for the consequences of the latest attack.

Based on the EPA’s own carbon accounting, shutting down every coal fired power plant tomorrow and replacing them with zero carbon sources would reduce earth’s temperature by about only one-twentieth of a degree Fahrenheit in the next 100 years.

Thanks to Obama’s war on fossil fuels, America’s electricity spare capacity, the difference between generation and end use, narrowed between 2007 and 2012 from 115 billion kWh to 58 billion kWh, a staggering 49.5% drop. The new carbon emission regulations, the final nail in the coffin, will assure that Americans will face an immediate reality that power will no longer be available upon demand.

Despite damage to the U.S. economy, the minimal impact of this latest attack, the EPA’s own testimony before Congress that the US alone would not impact world C02 levels, the fact that average global temperatures have not risen in almost 18 years, or the fact we’re experiencing the longest period in over a century without a category 3-5 hurricane, or that tornadoes are at a multi-decade low, that there were fewer than half as many forest fires as the US experienced in the 60’s and 70’s, or that sea levels rose just 8 inches in the last 100 years and Lake Superior is still covered in ice in June, Obama is imposing some of the most pointless and destructive regulations in American history.

C02 is a trace gas, a mere 0.04% of Earth’s atmosphere, that makes life on our planet possible. More C02 in the atmosphere means bigger crop yields, and forest growth. And even if you’re gullible enough to swallow the global warming lie, you must realize that any roll that C02 plays is speculative and contradicted by real-world measurements, observations and history.

The immediate affect will be on jobs and our economy as energy costs, in Obama’s own words, “sky-rocket.” A recent study projects an average annual $51 billion reduction to our Gross Domestic Product through 2030; an average 224,000 fewer jobs every year; an increase in energy cost for consumers of $289 billion that will cut total disposable income for U.S. households by $586 billion, hobbling the U.S. economy. Poor, middle class and minority families, along with those already dependent on unemployment and welfare, will be impacted the most. Millions of American families will have to endure a lower quality of life and will be unable to heat or cool their homes properly or pay their mortgage or rent, or save for retirement.   As Senator Joe Manchin, D-WV pointed out “a lot of people on the lower end of the socio-economic spectrum are going to die.”

Some states have already vowed to fight against these new regulations and many Democrats facing reelection in coal states have vowed to oppose Obama. Lawsuits and legislation may ultimately prevent this regulation from going forward but the best and most effect tool is in the hands of state and local governments.

Coordination is a little known feature embedded in numerous environmental laws, including the National Environmental Policy Act, the Clean Air Act, the Clean Water Act, the Environmental Quality Improvement Act of 1970, and the Endangered Species Act, to name only a few.   It requires the EPA and all other federal agencies to consider “all effects of environmental regulations” such as the effects on natural resources and on the components, structures, and functioning of affected ecosystems, as well as the aesthetic, historic, cultural, economic, social, or health, whether direct, indirect, or cumulative.”

Since carbon regulations will have a devastating effect on multiple aspects of the human environment, the EPA cannot unilaterally apply them. They must negotiate with state and local governments for implementation.

Source: States Can Stop EPA’s War on Coal; and CFACT