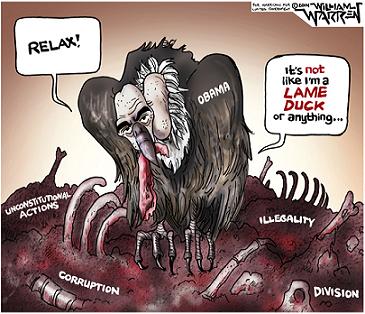 With Republican winning the Senate, liberal organizations are falling all over each other to have Santa fulfill their 2014 wishes before those mean old Republicans take office.

According to Adam Green, cofounder of the Progressive Change Campaign Committee, “if there is one guiding principle we would urge for the president, it’s don’t shy away from doing the right thing just because it would pick a fight with Republicans.” The right thing in this instance is an increase in the minimum wage that will cost some jobs; more government regulation on food, the economy and the environment that will definitely cost jobs and drive up food and utility prices; an assault on private property rights; and citizenship for criminals that crossed American’s border in violation of federal law.  They’ll get their wish and more!  Obama is already set to roll out a series of climate and pollution measures that makes his war against coal look tame.

December 1 EPA proposal to tighten limits on ozone will be the costliest federal regulation of all time, and a final rule is due December 19 clamping down on disposal of power plants’ toxic coal ash. Beginning January 1, 2015, the EPA is rolling out a long debated rule prohibiting states from polluting the air of their downwind neighbors, estimated to cost the economy $270 billion, and January 8, 2015 is the deadline for Obama’s most ambitious environmental effort, issuing a final rule restricting greenhouse gas emissions from future power plants.

While in China Obama added to the list a joint commitment with China to curb carbon emissions during the next two decades, a commitment that China will no doubt ignore, while Americans pay through the nose. And on top of that Obama is expected to accomplish his redistribution scheme by pledging millions if not billions of taxpayer money to help poor countries deal with the effects of a nonexistent climate change.

Come June, if there are any jobs left in America, the EPA plans to eliminate them entirely with their final regulation to cut greenhouse gases from existing power plants. This will not only drive your electric bill sky high but make the cost of everything you do or buy outrageous.

And even if you manage to survive this power grab, an even worse EPA regulation is on the horizon. The EPA is proposing a rule – ‘Definition of Waters of U.S.’ under the Clean Water Act – that strikes one little word from the existing Clean Water Act. And that little word is “navigable,” the elimination of which will leave all Americans at the mercy of the EPA, the Army Corps of Engineers, and every radical environmentalist group in this country. The striking of one little word will destroy private property rights in the U.S. and give the government complete control over your land.

Standing water in a low spot on your property that only occurs during a rain, a decorative pond, a vacant lot with standing water, a ditch, puddles, ephemerols, will all fall under the control of some nameless, faceless bureaucrat in D.C. that doesn’t give a damn about you or your family. Want to build, get a permit that will cost up to $250,000. Build anyway – expect a fine of up to $75,000 a day. And you can’t sue the EPA, they have to sue you which they can put off until the fines have accumulated into the millions.

In September the House passed a bipartisan bill, HR 5078, that prohibits the EPA and Corps from finalizing the WOTUS rule. A companion bill stalled in the Senate.

How much more control does Obama want over America? Given that he’s sic’d the EPA on rain-swelled ditches and soggy gullies, it seems there are no limits to his confiscatory ambition.