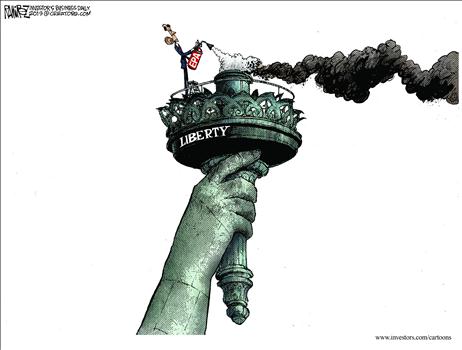 “Anyone who cares about our environment and our climate must recognize that cheap, plentiful, reliable energy is a nonnegotiable essential.”   Alex Epstein, “The Moral Case For Fossil Fuels”

Obama  describes the oil industry as a “tyranny.”  Bill McKibben claims that the fossil fuel industry is “Public Enemy Number One to the survival of our planetary civilization.”

Why is the industry viewed as immoral?

For decades environmentalist leaders have made a false  moral case against the fossil fuel industry by arguing successfully that it inherently destroys our planet and should be replaced with “environmentally” beneficial solar, wind and biofuels.  According to their claims,  fossil fuels increase environmental dangers through global warming and depletes environmental resources at an “unsustainable” pace and thus our only moral option is to use “clean, renewable energy” such as solar, wind and biofuels so that we can live in “harmony” with the planet instead of exploiting it.

Unfortunately, the fossil fuel industry itself does not refuted the environmentalist’s moral case and have, in fact, reinforced it.    Whether they believe that they must ‘play the game’ to keep the Obama administration happy while  hopefully holding on to their companies, or see this game as a way to increase their bottom line remains to be seen.  But their practice of publicly endorsing renewables as the ideal and reducing greenhouse gas emissions as necessary to prevent catastrophic global warming, implies that renewables are the goal, with oil and gas  just a temporary ‘necessary evil’.

The fossil fuel industry is not a necessary evil, nor is it destroying our planet or depleting resources.  Renewables are no more the ideal form of energy than wood is the ideal material for skyscrapers. Nature does not give us a healthy environment to live in – it gives us an environment full of organisms eager to kill us and natural forces that can easily overwhelm us.

It is only thanks to cheap, plentiful, reliable energy that we live in an environment where the air we breathe,  the water we drink, and the food we eat will not make us sick, where we can cope with the hostile climate of Mother Nature.  Energy is what we need to build sturdy homes, to purify our water, to produce huge amounts of fresh food, generate heat and air-conditioning,  irrigate deserts,  dry malaria-infested swamps,  build hospitals and manufacture pharmaceuticals, among many other things.

Legislators and regulators attempt to justify this massive power grab,  all their rules and regulations, and wasteful spending on so-called renewable energy projects as bringing  vast benefits to the citizenry.  But all too often,  the benefits exist only in their imaginations, faked computer models and  press releases, while environmentalists, politicians, and  green energy industries line their pockets.

The legal and regulatory  behemoth, our crushing $17 trillion national debt and massive unfunded  entitlements mean fewer jobs, more layoffs and steadily declining quality of life for tens of millions of Americans who struggle to heat and cool their homes, pay rent or mortgages and put food on the table.

Because of the global warming scam and the push for renewables, European families are reeling from energy price shocks, the sick and elderly  are dying because they cannot afford proper heating and nutrition, and industry leaders are warning that “green” energy and other climate change policies threaten “a systematic industrial massacre,” as soaring electricity, transportation and natural gas prices make companies less and less competitive in international markets.   It is a lesson that Americans cannot afford to ignore.

Earth’s climate may well be changing, as it has repeatedly throughout history.  But the changes are natural, and they have been far from catastrophic.  America needs fossil fuel energy to lift people out of poverty, maintain our living standards and ensure the wealth and technology to adapt to anything Mother nature throws at us.

← Sooner or Later, Blood Will Be Shed
“I do not answer questions.” →