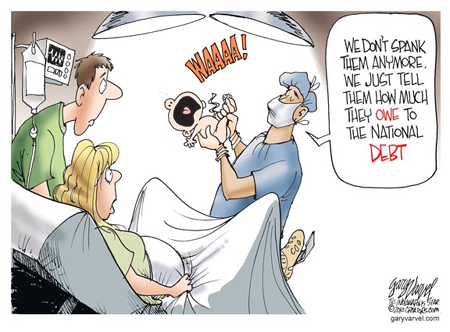 “It really is hard to find the words to describe the true horror of the national debt.  Our government has been on the greatest debt binge in all of human history, and a day of reckoning is coming that is going to be so painful that it is going to shock America to the core.  We have lived so far above our means for so long that none of us really has any concept of what normal is like anymore.”  Michael Synder

In truth, what we have done to future generations is beyond sickening.  Previous generations entrusted to us the greatest economic machine in the history of the world and we destroyed it.

The national debt has surged more than half a trillion in the last few weeks with the suspension of the debt ceiling in late October which allowed the government to borrow whatever amount they wanted, as long as they could find some nation dumb enough to trust them to pay it back.

The national debt is fast approaching $19 Trillion and counting thanks in part to the decision of Paul Ryan to set aside any conservative effort to defund Murder, Inc., or require reductions in the pace of spending increases, while providing an additional $1.8 Billion to “resettle” yet more illegal aliens, extra money to cover 300,000 additional VISAs for Muslims in 2016, and totally funding Sanctuary cities and the DREAM Act.

While we can’t blame Obama for the full $19 Trillion, he did manage to add $8 Trillion to the debt since taking office and one can only imagine what he has planned for his last year in office.  The spike in deficit spending under Obama’s reign, and especially under the suspension of the debt ceiling, shows deeply troubling elements of our current political  ruling class who have shown themselves more than willing to let Obama spend whatever he wants unbounded by any meaningful legal or political restraints.

Congressional response to stemming the flood is summed up in the endless whining of the political elite concerning the dangers of a government shutdown should Congress fail to let Obama fund the destruction of America.  But falling for that argument is to stick your head in the sand rather than accept the reality that Congress has sold us out; that they have abdicated their constitutional role to set spending priorities and appropriate the money to meet those priorities, just to maintain lifelong sinecures.

But perhaps the greatest concern in the twilight of our Republic is the mind-numbing selfish attitude of a people that see only benefits to be accrued from government spending.  The free-rider problem, according to which groups will seek special benefits for themselves from general funds paid for by all, combines with legislative log-rolling to produce bloated budgets as legislators strike deals paying off one constituency in exchange for colleagues’ ability to pay off others, with no sense of any maximum total pay-off.  What is missing in this equation is the very minimal sense of limits and of duty to the common good that can and should cabin the pursuit of self-interest.

Selfishness to some extent is normal since we are all self-interested. But what turns self-interest into childish selfishness is the lack of awareness of our duties, or our rejection of those duties.  When it comes to the national debt, unfortunately, our duties have become all too easy to dismiss.

We owe the duty to our ancestors not to squander the good things they bequeathed to us – our culture, our way of life our past financial stability, constitutional forms and republican character that once was the backbone of our government and people.  Having chose to hate our ancestors, decrying Jefferson as a mere rapist slave-holder and the Constitution as a pact among old white oppressors, too many of our “intellectuals” and the ruling elite have freed themselves from any feelings of responsibility or gratitude for their inheritance and therefore freed themselves from any felt duty to support habits of thrift, constitutional provisions of limited powers, or even limits on their ability to make the nation as a whole pay for their utopian dreams in which health care,  college tuition, or any other socialist program they can dream up, is paid for by somebody else.

To that sense of ingratitude toward our ancestors we have to add a sense of contempt for our children and our children’s children.  Those we allow to be born may be treated as coddled pets but not because it was best for them, rather because we do not want to do the hard work of teaching them to be responsible adults, to teach them that the world does not in fact revolve around them or their emotions of the moment.

In protecting them from all things, we have saddled them with the costs of paying for that protection, telling ourselves that we are building a “better world” by wasting billions on ideological fantasies of a burning world, on subsidies for things we happen to want, and for various programs doing for us what we should do and pay for ourselves.

This will not end well, and in the likely event that we are alive when the bill comes due to decades of profligate selfishness, our children finally will be right to blame us for their bad feelings – in particular – the feelings of hunger and hopelessness bred by a nation in bankruptcy.

Source:  The National Debt: Betraying Our Ancestors and Our Children by Bruce Frohnen, The Imaginative Conservative

← Obama; A Complete Fraud
Gov. McAuliffe may, could, hopefully will Lose HIS Protection Unit →